Do a series of spec upgrades and a new supercharged 6-cylinder engine improve the already impressive Range Rover Sport? 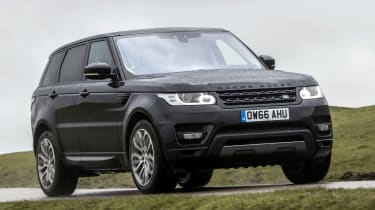 The Range Rover Sport continues to impress with its luxurious interior, comfortable ride and dynamic driving experience but a few tech updates have added to its appeal. The new 3.0-litre V6, while exciting, powerful and sounding great, isn't the best fit in the Sport. Its revvy nature is better suited to a sports car than a heavy SUV, so we'd stick with a torquey and cheaper-to-run diesel model instead.

A round of updates for the Range Rover Sport has been rolled out for 2017 with a handful of new features and you can now get a supercharged V6 petrol engine in the car. We've tried it out for the first time to see how the new unit fares on UK roads.

With 335bhp and 450Nm of torque, the 3.0-litre V6 petrol feels as powerful as you might expect: despite the Range Rover Sport weighing over 2.1 tonnes, 0-60mph takes around seven seconds and it'll hit a top speed of 130mph.

It feels very quick on the road, and higher up in the rev range it really takes off. While the V6 isn't the best-sounding performance engine around, it can still raise a smile here. However, it just doesn't feel like the right engine for this car. The alternative turbocharged diesel V6 and V8 units in the Sport feel much more relaxed, with loads of low-down torque. In comparison, this V6 petrol needs to be worked hard to get the best out of it. It's essentially a sports car engine put into a heavy SUV, and it feels it. 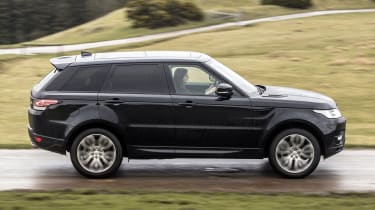 Official combined economy of 26.9mpg is surprisingly good for a 335bhp engine in a 2.1-tonne car, but the V6 diesel manages 40.4mpg, is just as fast and seems more suited to the Range Rover Sport’s character. Both six-cylinder engines use the same eight-speed automatic gearbox - which is a slick, fast-shifting setup - but the diesel costs from £67,900 and that’s £3,500 more than the petrol in the same HSE Dynamic trim.

While you can certainly feel the Sport's hefty weight shifting around, it's still as good to drive as ever. There's some body roll, but not so much that it feels unsettled, and the steering is accurate, if a little light. You need that, though, to place the huge machine on tight British B-roads.

Of course the Range Rover Sport has rivals like the Audi Q7 and Volvo XC90 licked when it comes to off-road ability, too. With a huge range of driving modes as well as a chassis designed to excel in difficult terrain, it's pretty unstoppable when heading onto the rough stuff.

The Sport’s suspension isn't as supple as the larger Range Rover’s, with a stiffer edge to the ride especially at low speed, but it's still a remarkably comfortable car. At higher speeds it glides over all but the biggest bumps, and the comfortable driving position, soft seats and quiet cabin all contribute to provide a relaxed cruise when you want it. At low revs the petrol engine is refined, too, offering little to break the tranquility. 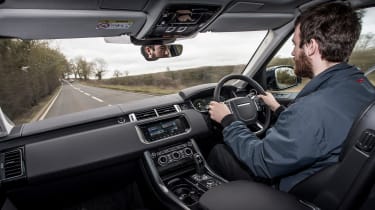 The interior is as impressive as ever, with excellent materials and a high quality feel. The design is starting to look a little dated, especially next to the superb Volvo XC90, but the Sport is still luxurious inside. A new 10-inch infotainment screen has now been added, with a faster interface and more features (including WiFi and smatphone connectivity).

There are a few updates for the car's safety systems too, and Blind Spot Assist, autonomous braking, Advanced Tow Assist and an Intelligent Speed Limiter are now available, plus a Low Traction Launch function for speedy off-road getaways.