The new Range Rover Velar continues the boom in high-performance SUVs, but can it sink the Porsche Macan and BMW X5? 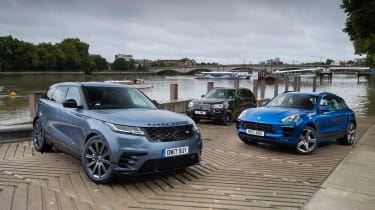 In a bid to cater for the sporting SUV market, Land Rover has added a fourth model to its Range Rover luxury division. The Velar slots between the Evoque and Range Rover Sport, but uses a lightweight platform that’s new to Land Rover, while it’s been given a sharp look to boost its desirability.

However, there are a number of talented rivals in the sporting SUV sector, and for the Velar’s first test, we’ve lined up a pair of the best heavy-hitters in the field. The Porsche Macan is the benchmark for any SUV for handling, and while it’s smaller and cheaper, it should also give the Velar a really hard time when it comes to performance, efficiency and kerbside appeal.

The BMW X5 is an old-school performance SUV. The 40d version has the firepower to match the Velar and the M Sport trim adds a sporty look, but do the X5’s larger dimensions and weight peg it back against these rivals?

The Velar marks the dawn of a new era for dynamic Land Rovers, but is it a step in the wrong direction for the British firm? Or does it really add driving dynamics to the marque’s traditional reputation for off-road prowess? 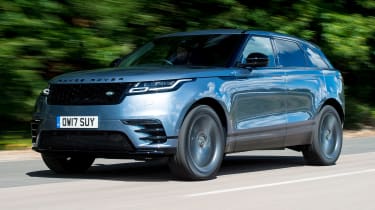 The Range Rover Velar is the fourth model in the brand’s luxury SUV line-up. It uses petrol and diesel engines ranging from 178bhp to 375bhp, and all have permanent four-wheel drive and an eight-speed auto box. We test the D300 V6 diesel in R-Dynamic SE trim, which starts from £64,030, although the car in our pictures is a £71k HSE model.

First impressions are that the Velar feels bigger inside than its external proportions would suggest. You sit low in the driver’s seat, but that means it’s not quite as easy to position on the road as its rivals here.

With 700Nm of torque, the V6 diesel has plenty of pulling power. It’s a bit slow in its initial response, but once it’s awake, the Velar lifts its nose and fires off. We managed 0-60mph in 7.2 seconds, although as there’s very little wind or road noise it doesn’t feel quick as you increase the pace, so you need to pay attention to the speedo to avoid breaking the limit. 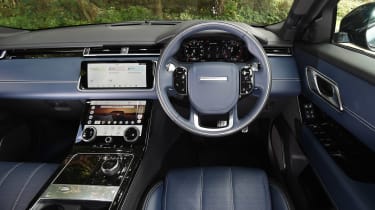 The standard eight-speed auto is the same as you’ll find in other Range Rovers, and the smooth-shifting unit rarely gets flustered into giving you the wrong gear. R-Dynamic models get metal-finished shift paddles, but really the electronics are so adept at the changes that you’ll rarely take manual control.

The Velar’s Terrain Response system has the usual suite of settings to give the car more off-road ability than any owner is likely to need, but it also features a Dynamic mode which is designed to boost handling.

In corners, the SE’s standard-fit air suspension does a good job of keeping things tied down, but the softly sprung rear means you can get the inside front wheel waggling if you push hard on the exit. There’s lots of grip and the Velar is eager to change direction, but the Macan has the edge for sporty handling.

Where the Range Rover claims back ground is for ride comfort. Air suspension is standard on D300 models, and the car is well cushioned against rough surfaces at all speeds. We’d stick with the standard 20-inch wheels fitted to SE models, because the optional 21-inch rims on our car added a firmness to the ride that made the car feel unsettled over bumps. 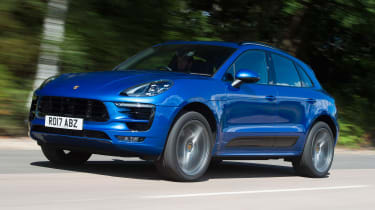 When the Porsche Macan arrived in 2014, it rewrote the rule book for SUV handling, which is why we’re pitching it against the Velar here. It’s been a sales success, too, and the Macan is still in peak demand, as the waiting list will testify. Engines range from a 2.0-litre four-cylinder petrol to a wild 434bhp turbo, but here we try the best all-rounder and only diesel in the range: the Macan S Diesel.

Whichever Porsche you drive, the brand’s motorsport DNA can be felt at its core, and the Macan is no exception. While the V6 diesel doesn’t sound that sporty, it delivers plenty of power, and the seven-speed PDK gearbox has smooth shifts and well spaced ratios that make the most of the engine.

Even though the Macan gives away 41bhp to the Velar, it is 80kg lighter, so proved competitive at the test track. While Porsche claims a 0-62mph time of 6.3 seconds, we managed it in 5.8 seconds, and performance is strong through the gears. 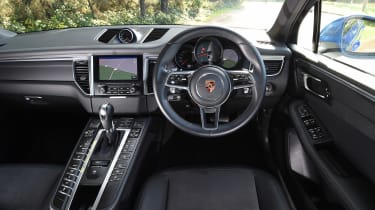 Add air suspension with PASM adaptive damping to the Macan to match the Velar, and there’s a big difference in character between the two cars. Sport and Sport Plus modes deliver tight body control and lots of grip, while the Porsche’s steering feels meaty and responsive. Hit a bump and you’ll feel it, but the Macan sticks resolutely to its line, and it doesn’t have the vague body control experienced in the Velar.

Turn things down a notch and the Macan is nearly as comfortable as the Velar. It’s firm, but not to the point of being uncomfortable. Our car’s 21-inch wheels gave the same unsettled feeling to the ride that the Range Rover suffered from, but opt for smaller rims and this should be less of an issue.

Testers’ notes: “Sport, Touring and Innovation Packages bundle desirable extras together on the Macan. They’re relatively good value, even if the cheapest pack is still around £10k.” 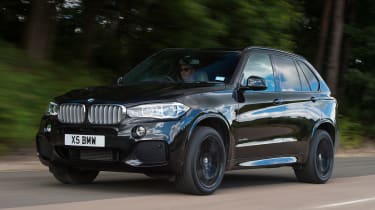 Back in 1999, the X5 launched BMW’s SUV range. It was dubbed a Sports Activity Vehicle, and had the measure of its rivals at the time. The current X5 Mk3 was introduced in 2013, and it has a tougher fight on its hands because of the sheer variety of rivals on offer. Here we test the xDrive40d version in M Sport guise.

The X5 Mk3 carried the DNA of its predecessors when it was launched, and today it feels even more like an old-school SUV. Compared with the Velar and Macan, its lofty driving position leaves you in no doubt about its SUV leanings, but it still manages to hustle along reasonably quickly when asked.

The 3.0-litre twin-turbocharged diesel is a great performer, and with 313bhp on tap, the X5 outguns the Velar by 17bhp. A claimed 0-62mph time of 5.9 seconds is pretty good considering the X5’s extra weight, while the eight-speed gearbox – which is sourced from ZF, just like the Velar’s transmission – delivers crisp shifts whether you use the paddles or let the electronics take control. 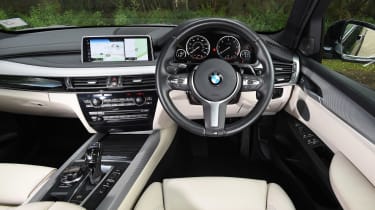 In corners, the X5 hangs on tenaciously, but there’s no escaping the fact its extra weight means it can’t keep pace with its newer rivals here. Body roll is present but is reasonably controlled, while the steering delivers consistent feedback, although it does feel slower to respond than the Range Rover’s wheel. However, mid-corner bumps unsettle the car’s suspension, and the X5 moves around significantly when this happens.

Unfortunately, this M Sport model comes with stiffer sports suspension as standard, and while the set-up is designed to improve handling, there is a sacrifice to be made in terms of ride comfort. In this test, the X5 delivered a ride that was slightly behind the Velar’s and Macan’s, but these two models had larger 21-inch wheels, whereas the X5 was fitted with the standard 20-inch wheels and run-flat tyres.

Testers’ notes: “BMW’s straight-six diesel is a gem of an engine that delivers great performance and a tuneful note. It’s just a shame the X5 can’t quite match it with engaging handling.” 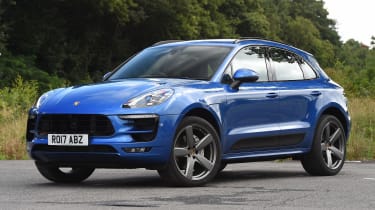 It’s a close result, but the Macan edges ahead in this battle of the sporting SUVs. Although the cabin doesn’t have the Velar’s wow factor, the Porsche more than makes up for this with its finely resolved chassis and sharp driving dynamics, plus it’s nearly as comfortable as the Range Rover when taking it easy. We would recommend adding the Touring Pack to boost its all-round ability as a family car.

The Velar is a great car, and it’ll sell like hot cakes purely based on the tech on board. But it doesn’t quite have the handling talent of the Macan, and the price looks a bit steep in comparison. The model that’s likely to feel the most heat from the newcomer is the Range Rover Sport, because the Velar does everything that car can do, but in a smaller and more attractive package. 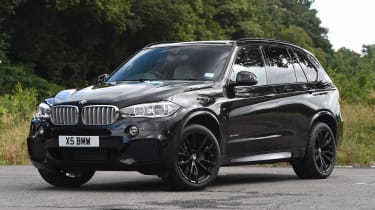 A sporting SUV of the old school, the X5 has to give best to the newer models here. That thumping straight-six still delivers stonking performance, but overall the chassis isn’t as accomplished in corners, while cabin space isn’t as far ahead of its smaller rivals as you’d imagine. Still, if you want a big SUV that’s packed with kit, the BMW is well worth checking out. 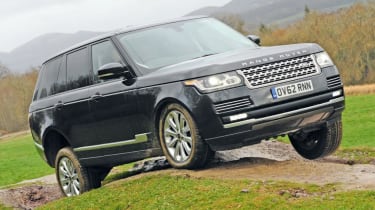 If you’re willing to buy used, it’s possible to head even further upmarket. We found several 2016 Range Rovers on sale with about 10,000 miles on the clock for around £60,000. The big SUV’s luxury interior and ride are on another level to the Velar’s. 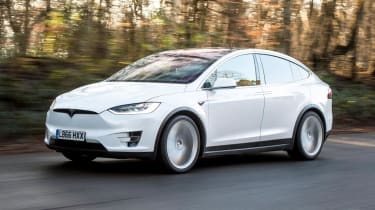 The all-electric Tesla Model X SUV offers something totally different. Used examples are all low mileage, because the car is so new, so they’ll cost you more to buy. But if you plug in your Tesla at home, you’ll save a fortune on your fuel bills.