Lexus' flagship two-door LF LC has been spotted out and about before 2017 debut, set to rival BMW 6 Series 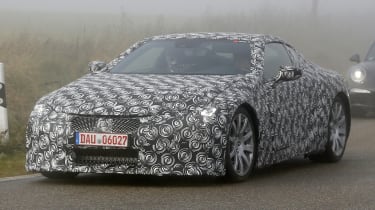 The LF FC luxury concept may be the only car Lexus is showing at the 2015 Tokyo Motor Show, but behind the scenes work is beginning on a car with a similar name. New spyshots show the 2017 LF LC coupe undergoing testing for the first time.

Despite expectations that the LF LC would make a more production-ready debut at Tokyo, it never materialised. However work is well underway on the BMW 6-Series rival, and these disguised images show it testing around the roads near the Nurburgring circuit in Germany.

The LF LC concept was first seen at the Detroit show back in 2012. We previously were told in 2014 by European executives of the Japanese firm that the LF LC concept will be put into full production, and judging by these prototypes a 2017 launch seems likely. 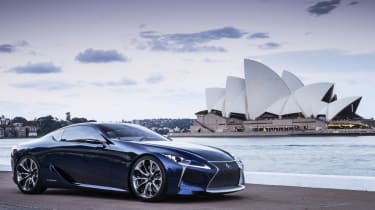 A source also told Auto Express that we can expect two engine options for the two-door coupe. A petrol-electric hybrid powertrain will power more entry-level versions of the car, although we're not sure if it'll be the same 2.5-litre unit found in the IS300h saloon. Hotter models will also arrive, and are likely to receive the 5.0-litre V8 found in the RC F and GS F.

The LF LC will also be built on Toyota's new scaleable platform architecture, that will first underpin a new crossover based on the C-HR concept that was seen at Frankfurt this year. 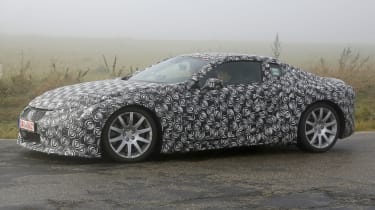 Although behind a disguise, it's clear to see the sleek two-door shape and dramatic Lexus grille remain part of the design. Influences from the LFA supercar can also be seen, but the four-seat LF LC will take a softer approach in order to compete with premium German rivals.

Do you think a new sports car can breathe new life into the Lexus range? Let us know in the comments section below...