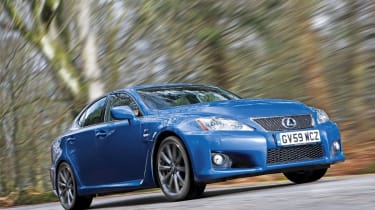 We really enjoyed our time behind the wheel of the IS F. Good to look at and engaging to drive, it’s a monster of a machine that really stirs the emotions. The highlights are its epic pace and soundtrack from the V8 engine. Although far from perfect – the ultra-firm suspension is an acquired taste – it does at least offer significant improvements over its predecessor, thanks to the limited slip differential and tuned steering set-up. If you’re in the market for a super saloon, it deserves to be on your list.

It’s not all been bad news for Toyota in 2010. While the firm’s global recall – sparked by accelerator problems – continues to rumble on, it does have a number of small, yet significant, things to shout about.

Chief among these is the growth of its Lexus division – which has unleashed two high-performance F-badged models in the UK over the last three months, including the LF-A supercar and the stunning new IS F driven here.

The IS F was originally launched at the 2007 Detroit Motor Show, and this is its first facelift. Key changes include a new limited slip differential and an updated interior.

Finished in striking blue paintwork, and fitted with huge smoked chrome alloy wheels, the Lexus has no problems turning heads. Details such as the distinctive stacked exhausts and prominent F badging help complete the package.

Priced £55,995, the IS F isn’t cheap. But what you get for your money is performance, and lots of it. In a straight line, the pace delivered by the bellowing 5.0-litre V8 is awe-inspiring, and the rate of acceleration is punctuated only by the crisp gearchanges delivered by the eight-speed auto box. The 0-60mph sprint is delivered in just 4.8 seconds, while top speed is limited to 168mph. Economy is impressive, too, at 24.8mpg, and CO2 low for a car of this type, at 270g/km.

The steering is also accurate and offers good feedback. Adding to the drama is the limited slip differential. In tight turns, you can feel the new arrangement forcing the inside rear wheel to grip hard, while through flowing bends, it will catapult you on to the straight with real force – particularly in F sport mode, which also allows you to slide the rear. The IS F’s suspension is disappointing, though. It’s very stiff, and lacks the well damped control of rivals such as the BMW M3 or Mercedes C63.

That aside, the IS F is an impressive machine. Great to look at and fun to drive, it’s a step in the right direction, and should ensure that Lexus goes from strength to strength, despite Toyota’s troubles.

Rival: BMW M3 With its powerful V8 engine and delicately balanced chassis, the M3 is super-fast in all conditions. Its SMG semi-automatic gearbox works really well, and the car’s brakes are strong. It remains the model to beat in this sector.