Lexus is back on top form with the IS, majoring on comfort with good results - though it lacks practicality and storage, while the diesel is coarse at times. 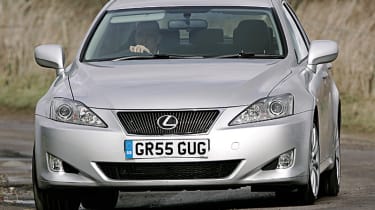 Driving: Lexus is keen to inject some vitality into its line-up. So, along with a design philosophy, called 'L-finesse', which is responsible for the IS' handsome, lean and athletic lines, handling has also been sharpened. And although the drive isn't as focused as that delivered by the BMW 3-Series, it's nicely balanced and grippy, while the rear-wheel drive layout means the steering is uncorrupted. Great insulation and sleek aerodynamics mean the cabin is silent at speed, while the ride is good, too. However, the engines may disappoint. The V6 petrol is a bit gutless while the diesel sounds rough at idle - and things don't improve much on the move. It responds well from 1,800rpm but the revs die away slowly when changing gear, which makes the engine feel lazy and reluctant. The gearbox is also jerky and snatchy at low revs, with a vague and notchy shift. Not what you expect from a Lexus - and an auto is unavailable with the diesel. At least the engines themselves are quite and free from vibration, and the brakes remain firm underfoot. What's more, refinement is superb in both models; there's no better compact executive model in that regard.

Marketplace: Lexus makes no secret of the fact that this car is a BMW 3-Series rival - though Mercedes and Audi will not want to be overlooked either. Significantly, although the model line-up is a little restricted, the company does now finally offer a turbodiesel alongside the smooth but thirsty six-cylinder. The oil-burner is crucial for the car's fleet aspirations. Company drivers will certainly be drawn to the IS in one regard - comprehensive equipment levels, including 10 airbags. However, the lack of choice (no estate, two engines) may hinder ultimate appeal.

Owning: While it externally mirrors the 3-Series' dimensions, the IS is poorly-packaged. The boot is poor and restricted by a narrow opening and wheelarch intrusion, while rear passengers don't have great head and legroom. The transmission tunnel is massive too, and feet can't be tucked under the front chairs. Yet despite this shrunk-in-the-wash feel, the cockpit is well laid out and ergonomically superb. The controls work with precision and build quality is in another league from most competitors. There's not much wrong with the driver's seat and its positioning in relation to the steering wheel, either - though again, large drivers struggle for elbow space, and due to the short front doors, have visibility restricted by the B-pillars. Fuel economy of the petrol model is poor and while the diesel is better, our return of 35.8mpg was some way off the 44.8mpg combined claim. Retained values show real promise but why has Lexus hindered the IS with an uncompetitive fixed-interval 10,000-mile service schedule?