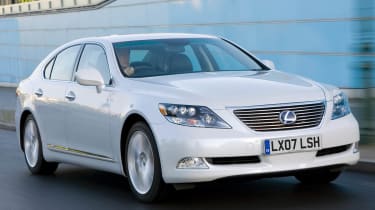 The LS600h has groundbreaking technology – in a flawed package. As a luxury hybrid it is peerless, but is that enough to tempt buyers away from traditional petrol or diesel power? With less potent performance than such models – and, on our drive, questionable economy gains – we’re not so sure. It is the most comfortable way to travel in town while producing zero emissions, but more conventional alternatives still have the upper hand.

No car maker has embraced hybrid technology quite like Lexus. While rivals moan about high development costs and technical inefficiencies, the Japanese manufacturer is committed to combining petrol and electric power – and the next vehicle in its highly charged line-up is the LS600h.

We have already tried the techno­logy in a left-hand drive version of the new car (Issue 958). But how does it work here on the UK’s roads? The first impression with any LS is its vast scale – especially in this long-wheelbase guise. Apart from its subtle badging, the hybrid shares the sombre styling of other variants. Even the twin chrome exhausts remain, hinting at its performance potential.

Under the bonnet is a 389bhp 5.0-litre V8. Add to that the thrust of an electric motor, and output is boosted to 439bhp. The final technical flourish is to feed power to all four wheels.

The cabin features the familiar LS dashboard with its huge array of buttons. While German rivals have opted for a central control system, there seems to be a switch for everything here – including EV (Electric Vehicle). Press it, pull away and the LS wafts in near silence through slow traffic. Refinement is astonishing as the batteries power the vehicle. Only when the charge runs out or you press hard on the acceler­ator does the petrol V8 kick in.

Lexus claims a 0-62mph time of 6.3 seconds, although real-world perfor­mance doesn’t feel so sprightly. With the CVT gearbox offering change-free acceleration, the luxury saloon isn’t slow, but it seems no quicker than a diesel-powered Mercedes S-Class.

We also struggled to match the maker’s claimed economy. Driving mostly in town, the Lexus returned little better than 24mpg, according to its trip computer – a long way short of the official 30.4mpg combined fig­ure. Official CO2 emissions are low, though; the 219g/km output is on a par with cars from the class below.

Away from traffic, the driving experience is similar to that of other LS models. While the motorway ride is smooth, it struggles to cope with sharp jolts and bumps. Tackling corners at speed leaves the Lexus floundering compared with Audi’s A8.

The new hybrid LS is a technological tour de force. Its superb refinement and peerless build quality are likely to be enough to tempt some buyers – although the compromised economy will be a turn-off for others.