A good-looking, well-built, refined SUV package, the Lexus NX is better in turbo petrol NX 200t guise but still cries out for a diesel 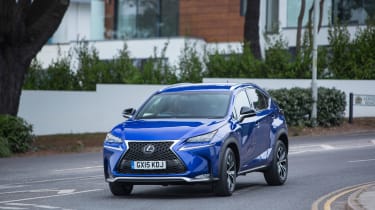 The Lexus NX is a good SUV that could be great with a diesel engine under the bonnet. As with the hybrid model, performance is limited by a disappointing gearbox, but otherwise the NX remains a super-stylish, beautifully made SUV. There’s plenty of space inside, decent, if not overly-generous, kit and a good level of comfort and refinement. Oh for a decent diesel version…

Style may not be everything when it comes to SUVs, but it counts for a great deal. Which is why the Lexus NX has a head start over its rivals – there are few cars that turn heads like the NX with its bold creases, imposing spindle grille and slim, slashed lights. It’s a seriously good-looking SUV.

But until now, it’s an SUV that was only available as a hybrid, hobbled by a CVT gearbox that may be efficient, but is lackadaisical in its performance. So the arrival of the NX 200t featuring Lexus’ first turbo petrol engine should be appealing, especially with a traditional six-speed torque converter automatic gearbox.

However, you’ll notice the P word in there: petrol. And petrol-powered SUVs are about as fashionable as bubble perms on footballers – fine many years ago, not so fine today. So much so that BMW doesn’t even bother offering a petrol-powered X3 – you’ll have to look at a Range Rover Evoque or Audi Q5 to find a rival for the Lexus. 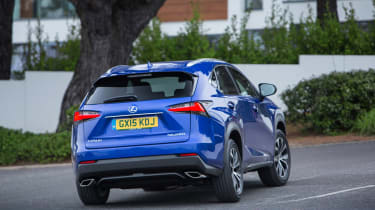 Like those cars, the NX 200t doesn’t come cheap at £38,095. It undercuts the petrol Evoque by a handy £8,000, but unusually for a Lexus, it doesn’t come massively well equipped. You do get adaptive cruise control, DAB radio and wireless smartphone charging, but you’ll have to find another £995 for sat-nav, or £1,995 for the premium version, which comes with touch pad operation for Lexus’ still-infuriating Remote Touch infotainment controller and a decent upgraded for the audio system.

You do get a smooth and near-silent (as is the Lexus way) 235bhp that, on paper, gets the car from 0-62mph in just 7.1 seconds – shame it doesn’t feel quite that fast on the road. Once again, that’s down to gearbox foibles – the six-speed auto is another lethargic Lexus box, taking a while to perform. The nine-speeder in the Evoque or eight-speeder in the Q5 are more engaging. 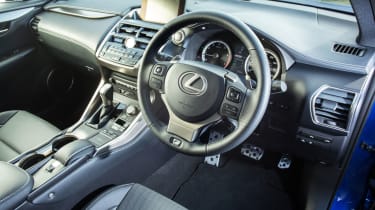 Not that you’ll complain about the ride – it’s firm thanks to the F-Sport trim, but not too uncomfortable. Our tests covered over 500 miles with up to four people on board and nobody remarked on intrusive bumps.

They did remark on the space, comfort and style inside – like the outside the NX interior looks great and is superbly made. 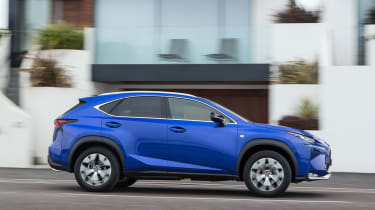 But what we remarked on most was the economy – 27.5mpg may not be too far off the claimed average of 35.8mpg, but with a 13-gallon tank you’ll get nowhere near 400 miles between fills, while company car drivers will be turned off by 183g/km emissions. You can understand why petrol SUVs, even when they look this good, aren’t too fashionable any more.