We've already tried the turbo petrol, so we see if the hybrid powertrain brings out the best in the sleek coupe 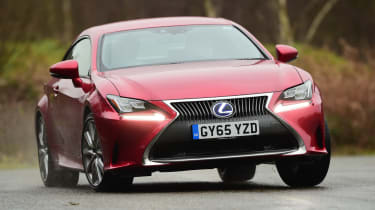 The RC 300h is set to be the most popular model in Lexus’ new coupé line-up, and we can understand why. It’s far from the most thrilling car to drive, but the hybrid is a more rational choice because it’s smooth and costs much less to run than the petrol 200t. The RC’s flaws still remain – namely its tight rear seats, small boot and awkward multimedia controls – although the car’s striking looks set it apart from its established German rivals.

The first thing you think of when you hear the name Lexus isn't generally a sporty coupe, but that hasn't stopped the company releasing the RC. The Japanese firm's focus is still firmly on hybrid technology, though - it expects to sell four times more examples of the petrol-electric RC 300h than the petrol RC 200t we’ve tested before. So, with that in mind, how does this economical hybrid coupe hold up against the competition?

The 300h’s powertrain will be familiar to anyone who’s driven a modern Lexus. It has the same 2.5-litre naturally aspirated petrol engine and electric motor combination you’ll find in the GS, IS and NX, producing a total of 220bhp and 221Nm of torque. That’s not a huge amount of shove, especially given the RC isn’t the most featherweight coupé in its class – it tips the scales at a chunky 1,736kg, which is around 60kg more than the 200t. 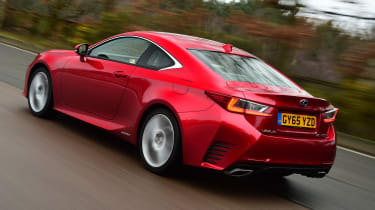 A 0-62mph sprint time of 8.6 seconds may be over a second down on the petrol car’s, but in reality, the hybrid feels just as quick when up to speed. This is mainly due to the 200t’s sluggish eight-speed auto gearbox, whereas the ‘gearless’ CVT set-up in the 300h provides fairly instant acceleration.

It’s slightly hesitant from a standstill, however, while the throttle response is sometimes difficult to judge. Ask for continuous hard acceleration, and – as is typical with this powertrain – revs will soar unpleasantly and you won’t be rewarded with much extra pace. It’s better to take it easy and enjoy the smooth and silent electrical assistance around town; if we’re honest, this suits the Lexus down to the ground.

Both the RC 200t and RC F impressed us with their style and quality, yet they were found wanting in terms of driving dynamics compared to established rivals. And it’s the same story with the hybrid. The hefty kerbweight blunts responses, so while the steering is direct and turn-in sharp, body control isn’t as tight as the BMW 4 Series’. 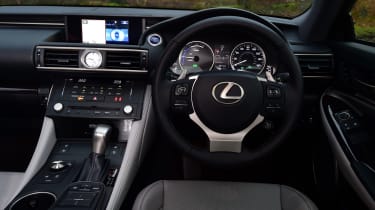 There’s little to engage keener drivers, and that feeling isn’t helped by numb controls and the inconsistent feelof the brake pedal (due to the hybrid’s regeneration). Our model does without adaptive suspension which allows a slightly softer damper mode, yet the 300h still felt comfortable despite an underlying firmness.

The Lexus is unchanged visually both inside and out, other than badging. But that’s no bad thing, as it’s more striking to look at than all of its German competitors. Our Premier-spec test car doesn’t feature the bigger wheels and sporty styling details you get on F-Sport models, yet it still looks the part.

Inside, it’s typical Lexus, as everything is solidly built and good-looking, plus there’s a wealth of standard kit on offer. All RCs are generously equipped, but Premier-spec models come with the likes of heated and ventilated electric memory leather seats and a fantastic 17-speaker Mark Levinson surround sound system. However, despite the luxury feel and wealth of gadgets, drawbacks remain. 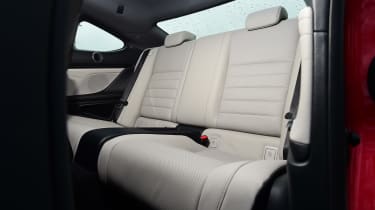 The touchpad-controlled navigation and media system is still rather fiddly to use on the move, and the screen, while clean enough, isn’t as big or clear as BMW’s set-up.

Furthermore, knee and headroom are limited for rear passengers compared with most coupé rivals, and the hybrid’s 340-litre boot is 34 litres smaller than the already tight luggage space in the RC 200t.

We think the petrol-electric RC 300h would make the most sense for all but the most diehard enthusiast. It costs just £500 more to buy than the turbocharged 200t, is considerably more efficient and suits the relaxed nature of the RC’s dynamics. However, our Premier-spec test car also costs over £40,000 without specifying any options, so it’s an expensive proposition against some talented rivals.