Regular Lexus RC coupe has the looks to take on the best, but does it deliver on its promise? 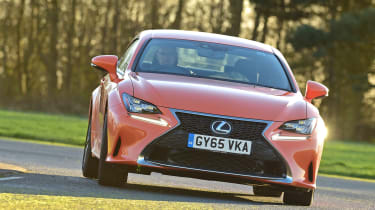 The RC will definitely appeal to those who want a comfortable, reliable and genuinely striking coupe. But it can’t quite deliver the driving experience that the looks promise; the BMW 4 Series offers a better ride and handling compromise. Lexus’ coupe is less efficient, heavier, less practical and pricier than the Germans, too. Still, if you’re bored of the more established two-doors, the RC is likeable enough to be a decent choice.

Lexus may have wowed Detroit showgoers with its stunning new LC 500, but the coupe’s cheaper brother, the RC, is already a striking proposition. Up to now we’ve driven only the spicy RC F – this is the first time we’ve tried the standard version. 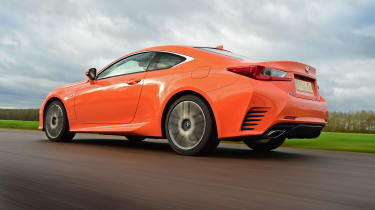 Even the regular RC has a lot of visual clout. Our car stands out in F-Sport spec and with its bold optional Solar Flare paint, but even lesser versions are far more distinctive than their BMW 4 Series and Mercedes C-Class Coupe rivals. Much of the detailing is very similar to the RC F, too.

The interior is solidly built and feels upmarket, although it isn’t as stylish as the C-Class Coupe’s cabin. There are some lovely details, however, such as the white ambient lighting on the doors and instruments inspired by those in the LFA supercar, which electrically slide across to reveal a neat menu screen. A familiar downside remains, however, in the form of the clunky touchpad menu control system that's downright dangerous to use on the move.

Front seat occupants are well catered for, but the back seats are tight for adults (even for a coupe) and the boot isn’t much to shout about – at 374 litres, it’s 71 litres and 26 litres shy of the BMW and Mercedes respectively. 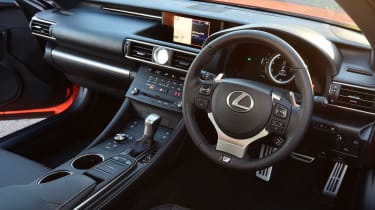 There’s plenty of kit, though. Other than the paint, the £1,995 Premium Nav was the only option on our test car, and as standard you’ll find heated and cooled electric leather seats, LED headlamps and adaptive suspension. F-Sport gets a limited-slip diff and a ‘Sport S+’ mode to stiffen up the car.

If those last additions sound racy, however, don’t be fooled – the RC is still very much a cruiser at heart. Our car had the entry-level 241bhp 2.0-litre turbo petrol, which never feels all that quick. That isn’t helped by the eight-speed automatic gearbox, which changes smoothly around town but is dim-witted on kickdown, refusing to commit to a gear. Manual mode isn’t quick enough, either. 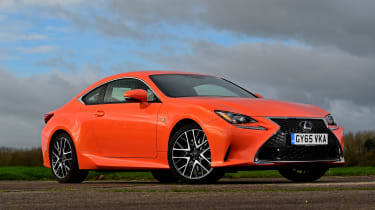 The Lexus is also hindered by its weight. It’s around 170kg heavier than the 4 Series, so simply isn’t as sharp to drive. Turn-in is direct, and it initially feels planted, but up the pace and its body moves around too much. The steering is well weighted but lacks feedback. Sport S+ mode sharpens things up a little, but not enough.

Add in the fact that the engine, even in sport mode, never really comes alive aurally and you have a sporting coupe that doesn’t exactly thrill. The benefit of this relaxed and quiet setup is a genuinely comfortable ride at a cruise, with only disturbance coming in the form of the big wheels thumping into low-speed potholes. But even the sportiest 4-Series is hardly uncomfortable, while the C-Class is more refined still.