The little Lotus Elise keeps getting better and better. We find out how 2006's version compares to its predecessors 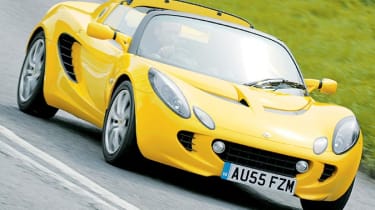 The Elise continues to impress with its handling, performance and styling. The latest model is also the most refined and comfortable to date, although the high price and costly options mean you're likely to spend more than £30,000. That's a lot for an impractical two-seater - but in today's sportscar market, there's nothing as characterful.

Secret new cars such as the forthcoming Esprit and Europa S might be the focus of attention at Lotus headquarters these days, but don't forget about the Elise. The little two-seater keeps on getting better and better, thanks to an unending development programme from the Norfolk firm. Auto Express has driven the latest 2006 version to see what's new.

External changes have been kept to a bare minimum, so the tiny Elise retains the sharp styling of old. However, Lotus fans will spot the updated LED tail-light clusters, which illuminate faster and weigh less than the conventional units which they replace.

Inside, the changes are also subtle, with new seats built by ProBax now fitted to every model in the Elise line-up, and improved window seals which are designed to reduce wind and road noise. There's also a recalibrated rev counter with fresh markings.

But the big news for 2006 is the introduction of four different option packages: Touring, Super Touring, Sports and Super Sports. The Touring and Super Touring packs increase comfort for owners who will mostly use their Elise on the road, while the Sports pairing are aimed at track day enthusiasts, and include bucket seats, racing harnesses and fire extinguishers.

Our test car was fitted with the more comfortable Super Touring option, which offers luxuries such as twin airbags, an extra pair of speakers for the DAB radio/MP3 CD player, leather upholstery and a separate starter button. There's even a cup-holder which slides out from under the dashboard. However, air-conditioning is still an expensive option at £1,295.

On the road is where the Elise excels, and the firm has wisely decided to leave the chassis alone, so the 2006 model still offers tremendous grip and body control. The steering is razor-sharp and rapid direction changes are dealt with in a responsive manner.

Ride is still impressively smooth for a car with such a firm set-up, and the revised pedal arrangement - accompanied by the addition of a fly-by-wire throttle - results in the perfect layout.

The build quality and cabin materials still lag behind mainstream rivals, and Lotus can no longer play the value-for-money card, because a well equipped Elise doesn't come cheap, but if you want every trip to feel like a competitive lap, few cars can match it.