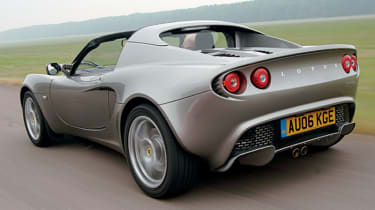 This is the car Lotus fans have been waiting for. In recent years, bosses have tried to take the Elise upmarket, but the entry-level S is great news for both buyers and the company itself. The 134bhp 1.8-litre engine is tractable, the suspension supple and, for driver involvement, the S has no peers. Sales deserve to be strong.

Lotus is going back to basics with an entry-level Elise S, and Auto Express is first to get behind the wheel. Star of the British Motor Show, the Norfolk-based firm’s new S is designed to help attract fresh fans to the brand.

The £23,995 two-seater lines up alongside the Elise 111R (now renamed simply the Elise R), and is aimed at affordable roadsters such as Mazda’s MX-5. While its big brother employs the 189bhp 1.8-litre VVTi-L Toyota engine, this model does without the trick cam-shaft and develops only 134bhp.

That may not sound like much, but torque has dropped by a mere 8Nm to 172Nm, meaning the 860kg roadster has plenty of pulling power. The 0-60mph sprint is dealt with in 5.8 seconds, thanks to an engine that’s a delight.

Gutsy and responsive, there’s no need to venture to the red line in every gear to extract the best per­formance. In fact, for road use it’s a better companion than the more track-oriented, rev-hungry unit in the R – not least because it returns 34mpg on the combined cycle.

The 1.8 VVTi is mated to a great five-speed gearbox which offers taut, fast shifts, while all the usual Elise attributes are intact. The cross-drilled brakes deliver immense feel and stopping power, the bonded aluminium chassis has boundless grip, the steering is delightfully accurate and the pack-age works very well. In fact, this is the sweetest Elise in the range, and the most driveable.

Not much else is new, however, although the rear lights feature LED technology and the improved seats get additional lumbar support and better shaping to take the sting out of long journeys.

But what’s most impressive is how solid our car felt. With no rat-tles or shakes, it seems as though Lotus has finally ironed out its build quality glitches. All the more reason to investigate this temptingly priced British sports car.