British brand has upgraded its supercar to take the fight  to Porsche’s latest big hitter. But do the changes deliver? 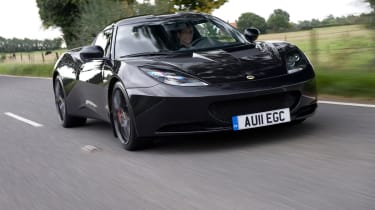 Taking a back-to-basics approach to honing the Evora has paid dividends for Lotus, and it’s impressive how much progress has been made in such a short time. The new interior still can’t challenge the best from Audi or Porsche, but the changes are welcome, as are the sharpened dynamics. Unfortunately, they don’t come cheap, as the 2012 Evora is £2,150 pricier than the outgoing car – and more than all of its competitors.

We’ve heard much about Lotus’s future plans, but bosses at the company are keen to prove they are equally busy brushing up their current crop of cars.
And they’ve admitted the Evora needs improving. There’s no problem with the way it drives – its performance and handling are first-class – but the layout and fit and finish of the interior can’t match premium brand rivals such as Porsche’s 911.
So, to help bring it up to par with the class leaders, and give the Evora the feel of a true luxury product, engineers have handed the standard car and the range-topping S model a raft of cosmetic and mechanical adjustments.

There was little wrong with the sporty exterior, so the latest updates only start to make their presence felt once you sit behind the wheel. The chunkier sports steering wheel and longer gearlever are much easier to grip, and the revamped cabin now looks much more unique.
It’s been rumoured that Lotus has been canvassing other British marques such as Bentley and Aston Martin to help improve its cockpits.
If this is true, it shows, as the previously spartan bucket seats are now embossed with a Lotus emblem, and a variety of colour and stitching options add a much more personal touch.
The adhesive smell that plagued earlier cars is gone, while other additions include silver kick plates on the sills, sturdier leather grab handles and an improved – but still optional – Pioneer touchscreen sat-nav.
These are the upgrades you’d expect in a car that costs £60,000. And the revisions do make a tangible difference to the perceived quality. But it’s the mechanical tweaks that really transform the Evora into a more compelling package than ever.
A new exhaust system has been fitted, with valves that open to give the supercharged 3.5-litre V6 a throaty howl. Press the Sport button, and the aural drama kicks off from as low down as 2,000rpm.
Performance is savage, even if the 345bhp power figure remains unchanged. The six-speed manual gearbox has also been revamped, with a lighter flywheel and new engine mounts helping to smooth out the notchy action to allow faster, more accurate gearchanges, particularly once you start to press on. And the stiffer suspension set-up from the S has now been introduced across the range.
That works in tandem with the direct steering and rigid chassis to ensure this is still one of the very best-handling cars on the market. Yet the ride is still supple enough to ensure that the Evora is useable on the road or track.
There are still niggles – the cabin is cramped and visibility poor – but Lotus has definitely raised its game. This Evora lays strong foundations for the return of the Esprit in 2013.
Share this on TwitterShare this on FacebookEmail