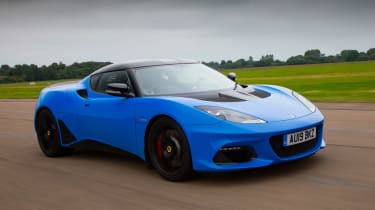 From a driving purist’s point of view, not much comes close to the Evora GT410 Sport. Little else feels so at ease in transitioning from a high speed lap around a race track, into a brilliant B-road blaster, to something that feels so composed in every day driving. The Porsche Cayman GT4, however, feels at least as talented from behind the wheel and plusher inside, yet costs £10,000 less.

This is the Lotus Evora GT410 Sport, currently the most extreme Evora to roll out of Hethel’s factory gates and, with a 190mph top speed, the fastest Lotus - at least until the fully electric Evija hypercar arrives later this year.

The Evora has always received the highest of praise for the way it drives. But now 10 years old, and with two recently-launched and exceptionally talented rivals in the shape of the Porsche Cayman GT4 and Alpine A110S knocking on its door, can the Evora still hold its own?

Of course, while the original car and its bonded aluminium chassis is getting on a bit, Lotus has subjected the Evora to a constant series of improvements throughout its life. Take the  Toyota-sourced 3.5-litre V6: it’s gained an intercooled supercharger and 134bhp from its original state, now making 410bhp and 420Nm.

That’s 4bhp down on the Porsche Cayman GT4, but while the peak torque is a match for the Porsche, the Evora’s forced induction brings its peak twist in at just 3,500rpm to the GT4’s 5,000-6,800rpm. It’s lighter too: the GT410 weighs 59kg less than the hardcore Cayman, the result being that the Brit sprints from 0-62mph in 4.2 seconds - two tenths quicker than Porsche’s official claim.

But the Evora’s engine is about far more than just the bare numbers. Throttle response is instant, helped by a lightweight flywheel that feels free of inertia. This means that the Evora seems to over-deliver on its claimed figures: acceleration is strong from anywhere in the rev range. The shove is accompanied by a tuneful wail from just behind your head - one prod of a dash-mounted button away from sounding even angrier, thanks to the two-stage sports exhaust. It’s not quite the pure scream of the Cayman GT4’s six-cylinder unit, but the Alpine A110S’s four-cylinder unit can’t match it for character. 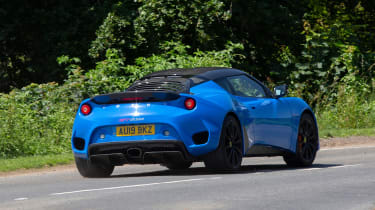 Nor does the automatic-only Alpine offer the interaction of the Evora’s manual gearbox. The Lotus six-speed unit has a lovely shift action, but can’t be rushed - deliberate, positive shifts are required, and the clutch is heavy. The pedals are perfectly positioned for heel-and-toe downshifts, too. An automatic is also offered, which trims a further tenth from the 0-62mph time.

Straight line speed has never been the Lotus party piece, it’s all about the corners. The GT410 Sport is no different. Weighing just 1,361kg it was never going to feel lethargic, but the forged aluminium wishbones, connected by Eibach Springs and Bilstein dampers, give lightning responses.

Super-sticky Michelin Pilot Cup 2 tyres are available, but on our cold February day behind the wheel, More forgiving Pilot Sport 4S items were fitted. Regardless, the way the GT410 Sport handles is sublime.

Around a damp, greasy Hethel test track, the Evora clings to its line gamely, with wonderful, predictable balance. It’s helped by the steering: the communication through the wheel is fantastic, allowing the driver to play with both hands and feet to tweak the car’s attitude to an incredibly precise degree.

Fun and adjustable though it is, it’s very confidence-inspiring through the high speed stuff, too. Through the 100mph windsock corner, it feels completely planted - helped in no small part by a threefold increase in downforce over the Evora 400, despite a lower coefficient of drag.

The brakes are phenomenal, too. Ask for everything that the four-piston AP Racing calipers can muster, and the deceleration is so fierce that the standard three point seat belt feels a bit inadequate. 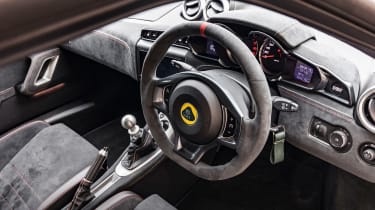 Peel straight off a track, and onto the road and you’d half expect that with such stunning body control it’d be unbearably stiff. But that couldn’t be further from the truth. There’s brilliant compliance to the way even this most extreme of Evoras rides - think of a Volkswagen Golf R in comfort mode, and you wouldn’t be that far off. There’s an appreciable amount of road noise, but not enough to be particularly tiring.

That compliance in the suspension means that it’s just as satisfying to hustle along a country road. Where some cars would bounce from one bump to the next, the Evora flows with the road; not only does this constantly instill confidence in the driver, but it means that it’s one of those rare cars that’s genuinely a pleasure to drive even when it’s just pottering about.

The cabin feels every inch that of the road-going racer. The alcantara-trimmed surfaces add a sense of purpose, while the (limited) view out the back is obstructed by both the louvres in the engine cover and the top of the engine itself. Overall quality is okay - the cabin is fairly well built, if sparsely laid out - but details like the aftermarket-spec touchscreen infotainment system mean that overall it just feels a bit cheaper than a Cayman GT4. Unlike the Porsche, the Evora can come with four seats - though the back pair are next to useless.

Prices for the Evora GT410 Sport start from £85,900. That’s about ten grand more than the Porsche, which is a significant gap up against something that offers such an exhilarating experience in its own right. The Alpine A110 S is cheaper still, at £55,900.