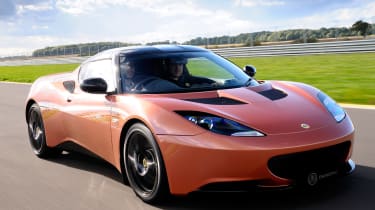 The future of Lotus is still unclear, but the British sports car maker is showing commitment to its cause by pushing ahead with this – the Evora 414E prototype.

It’s essentially a range-extending Evora, made possible by a £19million investment by the Government’s Technology Strategy Board (TSB). But it’s been designed to demonstrate the capabilities of current hybrid technologies, rather than point to a future Lotus production car.

The 414E also forms the basis for the stunning Infiniti Emerg-e, which was unveiled at the Geneva Motor Show earlier this year.

It uses two electric motors to power the rear wheels, with a 1.2-litre three-cylinder engine acting as a generator to recharge the batteries. The combustion engine – which can run on petrol, methanol or ethanol – doesn’t drive the wheels, but kicks in under hard acceleration, or when the batteries drop to around 30 per cent charge. Lotus claims an electric-only range of around 30 miles from a single charge, which should take around five hours through a normal three-pin plug.

The 414E name refers to how much power the car produces. The electric Evora is rated at 300kW – the equivalent of 414bhp – and it feels every bit as powerful as that figure suggests. Around the test track at Lotus’s headquarters in Hethel, Norfolk, the 414E pulled strongly from a standstill, and impressively was still doing so past 100mph.

The car covers 0-62mph in just 4.4 seconds, and although it weighs a massive 377kg more than a standard Evora, the instant torque pins you to the back of the seat.

Bury the throttle and the petrol generator burbles into life with an intrusive drone. However, we’re assured the engineers are working on making this more refined, and giving the 414E the sound and feel of a conventional electric car.

The steering is well weighted, and aside from the eerie quietness the 414E feels exactly like a standard Evora. It lacks some of the sense of occasion you get from the 3.5-litre V6 road car, but feels as sporty as you’d hope.

The interior is lifted from the Evora, too – apart from a unique Alcantara dash, the layout is very familiar. The intuitive touchscreen that usually houses the sat-nav and infotainment system relays detailed information about energy distribution and the state of the batteries. The heating controls are identical, while the gearlever has been replaced by a series of buttons from the IPS automated manual box, which is an option on the Evora and Evora S.

The paddles on the steering wheel were redundant on the prototype we tried, but Lotus engineers have big plans for the imitation gearbox. Phil Barker, chief engineer for hybrid and electric vehicle product, told us that the brand is looking into the option of a virtual seven-speed shift system.

This would work in line with a Halo Sonic sound system, which uses synthesised sounds to give the aural sensation of a normal combustion engine. What’s more, the driver will be able to use the system to activate and control the degree of regenerative braking. As you lift off the throttle and change down the gears, the car will use the energy it creates to recharge the electric motor.

So the 414E is an impressive engineering exercise, and shows what we can expect from Lotus in the future. It’s not perfect – we were only allowed to do four hot laps before the batteries needed time to cool – and only time will tell whether it can become a usable alternative to the Evora coupe. But Lotus has pledged to continue its development, and we’ve already been invited back to Hethel next year to sample the improvements first hand.