We drive the supercharged Evora S IPS, which gets an automatic gearbox for the first time 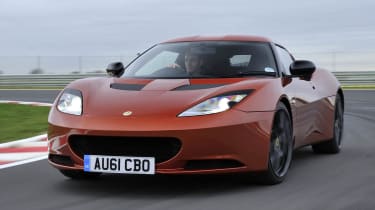 Worldwide markets such as the US are the reason Lotus is offering the Evora with the IPS automatic transmission – but its adoption is only partially successful. It lacks the finesse of the rest of the driving experience, which robs the Evora S of a large portion of its driver appeal. It feels more grown up as a result, which, allied to greater quality will undoubtedly suit new buyers to the brand. But we’d stick with the manual if pure driving thrills are your aim.

If Lotus is to achieve its ambitious global sales goals, it needs cars like this Evora S IPS. Having the £1,800 optional Intelligent Precision Shift six-speed automatic gearbox broadens its appeal – and allows the Evora to enter markets that wouldn’t even consider it with the standard manual transmission.

Much like the manual car though, the Evora S IPS’s weak link is its gearbox. While the 345bhp 3.5-litre supercharged V6 delivers sharp responses, the six-speed automatic doesn’t offer the same.

It is smooth enough when trickling along, but increase your pace and the gearbox seems to be playing catch-up, being rather late to up-shift, and reluctant to shift down quickly enough. Pressing the Sport button does improve things marginally, but for the IPS to work best you need to control it yourself.

To do so there’s a pair of paddles attached to the back of the steering wheel. Use them and the IPS feels more immediate, but there’s still some indecisiveness, and it reverts back to automatic mode within seconds of a manual shift. It all feels rather like it’s working against rather than with you, being neither particularly intelligent nor precise.

That’s a shame, because the Evora's handling is superb and the improvements to the 2012 Evora S really have brought it into contention with its key rivals. The interior is smarter than ever, helped by the addition of a number of options including Tech and Premium packs - although ticking those boxes does push it into Porsche 911 price territory, when its natural rival really should be Porsche’s Cayman S.

That’s even when specified in +2 guise as tested here, with the rear ‘seats’ being better considered as additional luggage space. Still, drive the Evora S IPS in a more sedate manner and it works well as a comfortable, grown-up GT car. It’ll appeal in the markets its intended for, but there’s no denying that the automatic transmission denies the Evora S’s driver some control.