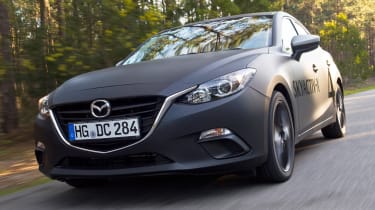 Mazda’s proving there’s life left in internal combustion engines yet with the application of some incredibly clever and complicated tech that feels totally normal and easy to drive. If and when this prototype comes to fruition, there’ll be useful gains in efficiency and more easily accessible performance. What’s not to like about that?

Mazda does things differently. As most manufacturers turn to turbos to balance power with efficiency, the Japanese brand is plugging away with some incredibly clever tech to deliver a similar end result – and we’ve already sampled it.

The Japanese brand thinks its new Skyactiv-X engine technology will, at least in the mid-term, provide an efficient solution to the approaching tighter emissions laws.

Now for the technical part: Skyactiv-X is a petrol engine that combines conventional gasoline technology with some of the features that makes a diesel so attractive. Mazda calls it Spark Controlled Compression Ignition – not the snappiest title, but stick with us, because the engineering is impressive. 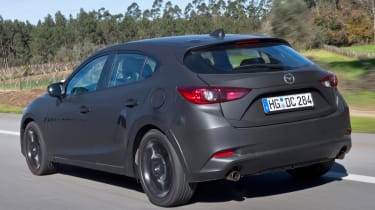 In a diesel engine there’s no spark plug. The fuel and air mixture that’s burnt in the engine’s cylinders is ignited through the sheer force of squeezing it. This is called compression ignition, but it’s very inconsistent with a petrol unit.

However, depending on where the Skyactiv-X engine is in its operating window (there are seven key control factors), it uses a spark plug as a way of initiating the instant compression ignition process, giving greater control and more reliability over the burning of this highly compressed fuel and air mixture. It can also work as a conventional petrol would.

The engine is a supercharged 2.0-litre four-cylinder unit, with the supercharger used to supply air rather than directly boost performance, improving initial response and making the mixture leaner (that means a higher air-to-fuel ratio than in a normal petrol). This improves efficiency as well. The brand is targeting 187bhp and 230Nm of torque, and while the engine isn’t quite up to these claims yet, the implementation of the technology is good.

In the spark-controlled state, which widens the operating window where the clever compression ignition combustion can take place, there’s good response and pull low down – a diesel-like trait. Back-to-back with an existing 118bhp 2.0 Skyactiv-G petrol Mazda 3, in the current car you feel like you need to change down a gear to get moving; in the Skyactiv-X model a downshift is not required as frequently, yet it still revs with the free feeling of a conventional petrol higher up the rev range.

The trick here is that the air supplied by that supercharger is swirled on entry to the cylinder, meaning the fuel and air is mixed as thoroughly as possible – Mazda’s buzzword to describe this is ‘homogenous.’ Once the spark ignites this super-squeezed mix into a little fireball in the centre of the cylinder, the rest of the mixture (under high pressure and on the edge of combustion anyway) explodes instantly, meaning you get a strong level of power for less fuel burnt. From a quite technical concept, it’s this 20 to 30 per cent improvement in efficiency that’s easiest to understand. 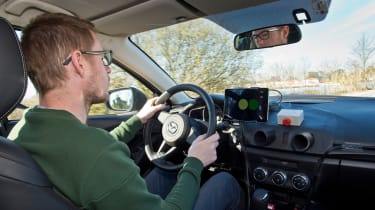 What’s impressive is the unit’s happiness to slip into this state and stay there at a constant throttle or speed. You can sense the transition between modes occasionally, but the set-up we tried is far from its final calibration, and we’re told these minor kinks will be ironed out by the time the tech launches in a production Mazda car (more on that in a moment).

This prototype also featured some chassis alterations over the current Mazda 3. With more bracing on the structure, different suspension geometry at the front, 10 per cent softer tyre sidewalls and bushes and revised dampers, the culmination of these modifications is a car that steers with all the precision we’ve come to expect from Mazda, but one that is quieter, more refined and more comfortable too, without sacrificing any of its trademark agility. There’s also a new seat design to improve long-distance comfort.

It’s no surprise that the engine tech and chassis improvements are being trialled on a Mazda 3 prototype, either. This model is due for renewal next year so expect the next-generation 3 to debut this Skyactiv chassis architecture and – the big news – its Skyactiv-X engine tech. If you’ve seen a picture of the brand’s Kai concept, we’re confident the Mazda 3’s replacement will look similar, only with a few more concessions to road use and every-day practicality.