Our verdict on most popular version of latest family hatch. 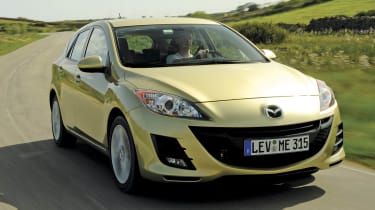 The difference between the all-new 3 and its predecessor is far greater than our pictures suggest. It is now a much more expressive design, and far more likely to get noticed. The driving experience is great, and the sprightly chassis and impressive engines give the Focus and Golf a run for their money. Sometimes a new outfit is what’s needed to highlight a hidden diamond.

Three’s a crowd – which is why Mazda is aiming to shake up the popular trio of the VW Golf, Ford Focus and Vauxhall Astra with its latest family hatch. We first drove the 1.6-litre diesel 3 in Issue 1,048, but now we’ve tried the car that’s predicted to be the most popular model– the 1.6-litre petrol variant.

With its sharper face, the new 3 is far more distinctive than its predecessor. The body isn’t quite as well sculpted as rivals’, but it’s still exciting to look at. Wide arches, smart 17-inch alloys and bumper spoilers on our TS2 mean the design certainly fits Mazda’s ‘Zoom-Zoom’ mantra.

Inside, the layout is clean and well put together, yet it doesn’t live up to the promise of the exterior. We like the rakish aluminium-trimmed dials, but otherwise the cabin is unremarkable. The console and steering wheel are awash with buttons, making for awkward operation of the small sat-nav.

Yet on the road the 3 doesn’t disappoint, and it feels more potent than this engine’s 103bhp suggests. A 12.2-second sprint from 0-62mph may not impress, but there’s enough oomph for most drivers once on the move, with 145Nm of torque available at 4,000rpm.

The chassis is what really shines, though. Pliable suspension irons out bumps, and there’s grip to spare in the bends. Direct, communicative steering makes cornering a rewarding experience. One of the best aspects of the new 3 is that, at 1,180kg, it’s 15 per cent lighter than before. This helps drop CO2 emissions to 149g/km, while the 1.6 petrol model hits 45mpg, so it’s greener than its rivals.

An ‘i-stop’ variant will follow shortly after launch, making the 3 even more cost efficient. At the other end of the range, a fire-breathing 256bhp MPS will push the impressive driving experience even further.

To be a hit in the cut-throat hatch market, a car needs to be a great all-rounder – and the 3 is certainly that. It’s always been highly driveable, but after a stylish reworking, it’s worthy of a place among the class leaders.