Final report: After nearly 32,000 miles, our man’s at one with his trusty steed 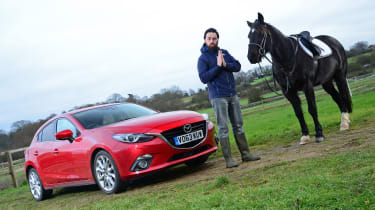 I have to admit that I’ve never been particularly fond of horses. They scare me a bit, due to a combination of the immense power in their legs, the fact they have a mind of their own, which makes them unpredictable, plus their unhealthy love of Polo mints.

It’s a shame, because our Mazda 3 has been built with the Japanese philosophy of ‘Jinba Ittai’ in mind. This translates as horse and rider in perfect harmony, and is the basis of Mazda’s SkyActiv range of weight-saving measures. When car makers come up with these phrases, I don’t really pay much attention, but over the past 12 months, 31,969 miles and numerous trips across the South Downs, I realise that it sums up exactly how I feel about the Japanese hatch.

As Mazda has embraced the horse and rider theme to develop its cars, I felt that it was time to meet my four-legged fears face-to-face for the 3’s final photoshoot, because it’s one of the best cars I’ve ever run. 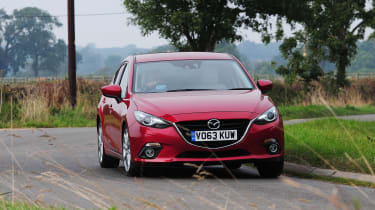 The bond between a horse and its rider is, as I have come to learn, very important, and it’s not something which is easy to acquire. But my affinity with the Mazda seems to have got stronger as the months have passed. The 364-litre boot isn’t the biggest in the class, but it has more than enough room for all my camera gear. And when I’m not carting around cameras, tripods and cleaning kit, there’s enough room to seat five adults in comfort on long journeys.

I also think the 3 looks pretty good, especially in top-spec Sport trim, and is more distinctive than other hatchbacks currently on sale.

But the one thing which has really won me over is how the Mazda drives. The 118bhp 2.0-litre naturally aspirated petrol engine seems a bit archaic when compared to the latest small-capacity turbos offered in other cars. Yet while it’s a little underpowered, it’s a joy to use. You need to rev it to make the most of the power on tap, but the slick six-speed gearbox means it’s no hardship to keep it in the sweet spot of the rev range. 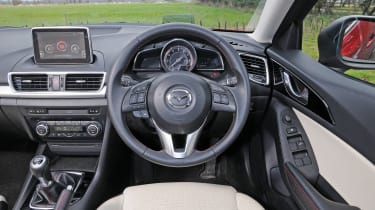 The car also feels very light and agile, and is a real joy to drive quickly on twisty roads. And while road noise is a little intrusive at motorway speeds, this is a price that’s worth paying so that I can take advantage of the sharp handling. I guess that’s where the horse and rider theme makes the most sense, as the 3 really is an entertaining driver’s car.

Sadly, it’s now been put out to pasture, returning to Mazda, leaving me with a long face. And my next set of wheels will have to be pretty special to fill the shoes of my dearly departed steed... 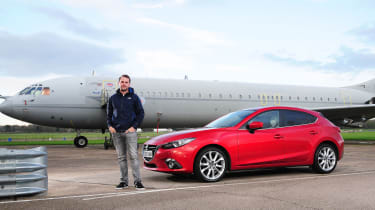 Think of the Jet Age of the fifties and sixties, and no doubt words like ‘speed’ and ‘glamour’ spring to mind. You can also add ‘thirst’ to that list, as the fastest aircraft of the era burned through so much fuel on high-speed runs that mid-air refuelling with planes such as the stunning Vickers VC10 seen in our pictures was commonplace.

However, fast forward to the present and head back down to earth, and you’ll discover that you no longer have to pay a heavy price at the pumps if you want a mix of high performance and style. Take our Mazda 3 for example. Thanks to the Japanese brand’s innovative SkyActiv technology, I’ve been able to enjoy a car that blends stunning looks and a sparkling driving experience with impressive fuel returns of 41.5mpg.

That figure doesn’t look so great when compared to, say, our Suzuki SX4 S-Cross, but it’s worth bearing in mind that the Mazda is powered by a fairly straightforward 2.0-litre petrol engine, not some eco-optimised small-capacity diesel. It’s not as though this frugality has been achieved through the application of a feather-light right foot, either. My commute into our central London office takes in towns, villages and motorways, plus plenty of fast single carriageways that are littered with HGVs that need to be overtaken. As a result, the 3 is rarely allowed to relax. 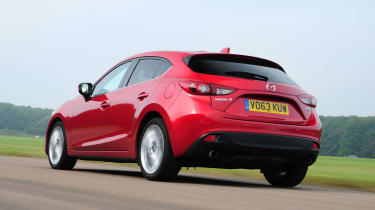 Not that this is a problem, because unlike its turbocharged rivals with smaller capacities, the Mazda’s engine loves to be worked hard. The four-cylinder feels a little bit limp below 3,000rpm, but above it, the engine note takes on a racy rasp and the 3 accelerates with real urgency. Adding to the thrills is the six-speed manual gearbox, which benefits from the sort of snappy shift you’d expect on a sports car.

So, given that it’s not my driving style that’s boosting the car’s economy, what can it be? Well, for starters, there’s the clever i-eloop energy recovery system, which uses a lightweight capacitor to store electrical energy that’s captured when the car is braking or coasting.

This can then be used for powering the efficiency-boosting stop-start or any other electrical system. As a result, the 3 doesn’t have to produce as much electricity using a traditional engine-driven alternator, meaning more power for acceleration and less fuel used. 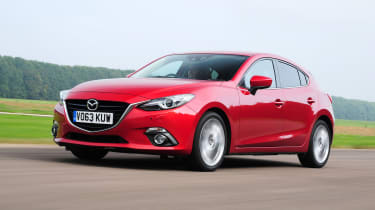 And then there’s the car’s low kerbweight. Our Sport Nav model comes loaded with standard kit, yet it tips the scales at just 1,280kg – around 100kg less than an equivalent Vauxhall Astra – and, obviously, the less weight you have to cart around, the less fuel needs to be used. On top of this, the Mazda’s low weight improves handling and braking, too. Head down a long, twisting back road and there’s endless fun to be had as you revel in the 3’s remarkable agility and poise.

Factor in the car’s attractive looks, practical cabin and generous kit list, and it’s no wonder I’m enjoying every moment behind the wheel of a car that proves that fast, fun and frugal family motoring is no flight of fancy. 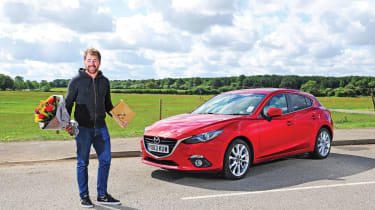 They say absence makes the heart grow fonder, and I’ll have to admit that a period of forced separation had me yearning to get back behind the wheel of our Mazda 3 as soon as possible.

It all started back at the beginning of June, when my beloved hatch suffered the indignity of being side-swiped by a turning lorry. I wasn’t driving it at the time, but the Mazda’s bodywork had been torn open like a sardine tin from the rear pillars forward, as the back end of the lorry caught the side of the car. In fact, it was lucky that the damage didn’t occur further forward – if it had, the driver and passengers involved could have been injured.

The damage was extensive – the rear door lock was even pulled apart – but the lorry driver admitted fault, and the Mazda was whisked away by the body shop to see whether it was repairable. As it turned out, it was, but as it’s a new car, the replacement parts needed to be shipped from the factory in Japan, rendering it out of action until they arrived. 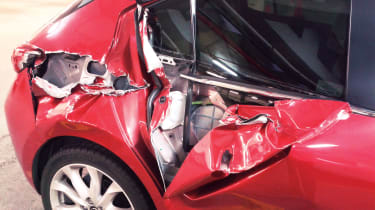 In the meantime, I needed some replacement wheels. Initially, these came in the shape of our Ford Fiesta ST, and when that left our fleet, I had the pleasure of running picture editor Dawn Grant’s Honda Civic Tourer. But while both models had their attractions – the Ford with its stunning performance, the Honda with its big boot – I felt like I was cheating on my Mazda the whole time.

Fast forward two months, and the 3 is back to full fitness, resplendent in its Soul Red metallic paint and with none of its bare metal showing. Getting back behind the wheel after spending time with other cars has really helped me to appreciate the Mazda’s qualities, too.

Sure, the Fiesta ST was fun to drive, but the Mazda also does a pretty good job of putting a smile on your face. The sharp steering and agile chassis are great on a twisty road, and while you need to rev the 2.0-litre petrol engine to make the most of its performance, it has a pleasingly sporty exhaust note. Add in a slick-shifting six-speed manual box with a short-throw gearlever, and I’m just as happy at the wheel of the 3 as in the ST. 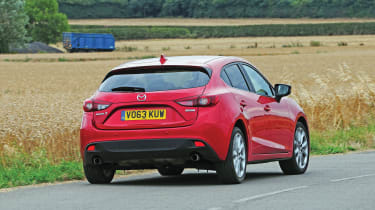 Surprisingly, given its large size, we’ve averaged around 40.2mpg since the car’s return. This figure is helped by the standard stop-start boosting urban economy, which is a definite bonus considering I spend much of my time on London’s congested streets.

Admittedly, the Mazda can’t match the Civic Tourer for carrying capacity, but there’s still plenty of room for all of my camera gear in the back, while the cabin storage is better, too. I also like this car’s dash layout, because it looks stylish and is less fussy than the button-heavy Honda.

Downsides? There’s plenty of road noise at motorway speeds from the wide tyres, the head-up display works erratically and the controller for the infotainment system fell through the centre console. But then nobody’s perfect. As in any relationship, you learn to live with those idiosyncrasies – otherwise you don’t appreciate what you’ve got until it’s gone...

Can our man successfully downsize from 6 Tourer to 3? 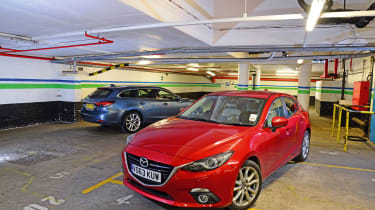 Downsizing is all the rage these days, as buyers look to make big savings on their motoring bills – and I’m no exception. You see, after inheriting the keys to our Mazda 6 Tourer from senior staff photographer Pete Gibson, I soon decided I needed something smaller.

Make no mistake, the 6 is a great car and has been perfect for hauling around my camera gear, while the 2.2-litre diesel helps make the Tourer a fast and frugal performer. And while the car suffered from a few gremlins when new, it has been a faultless performer ever since.

Yet despite its stylish lines, strong performance and low running costs, the practical, family-friendly 6 is just a little, well, grown-up for me. Fortunately Mazda has something more suitable in the shape of its all-new 3.

The sleekly styled newcomer certainly looks the part in its optional £660 Soul Red metallic paint, while its sporty stance helps it stand out from the crowd. I also like the slickly designed cabin.

Not only is its solidly built, it’s packed with standard kit. Still, that hasn’t stopped me hitting the options list and adding the £1,200 leather seat trim and £700 Safety Pack, which includes lane departure warning and low speed collision avoidance. However, it’s under the skin where the 3 gets really interesting. 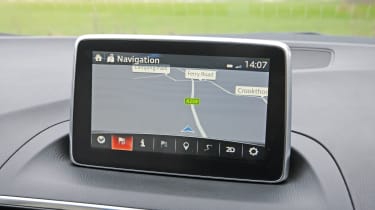 You see, I’ve opted for the new 118bhp 2.0-litre petrol with SkyActiv tech. That might look like a financial faux pas given I rack up around 30,000 miles a year, but with claimed fuel economy of 55.4mpg and the lower cost of unleaded I should be quids in. Its CO2 emissions of 119g/km are pretty impressive, too.

Of course, you have to work the 2.0- litre unit harder than the 6’s muscular diesel, but it’s a refined performer and copes well with motorway inclines. Better still is the 3’s sharp handling, which comes into its own on my twisting commute across the South Downs.

In fact, the fast, fun and frugal Mazda is so far proving that there aren’t many downsides to downsizing. Let’s hope I feel the same in 12 months’ time.