The facelifted Japanese MPV has the stylish Ford S-MAX firmly in its sights. 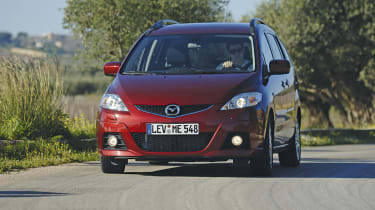 If it’s not broken, don’t fix it – that’s what Mazda is saying with the revised 5. Although the styling updates are far from radical, it’s still attractive. And inside, buyers will love the flagship’s excellent new sat-nav and optional electric doors. Yet even lesser cars offer a brilliant seven-seat layout and precise driving experience, while there’s a wide engine range, too.

When Mazda launched the 5 nearly three years ago, it was a real breath of fresh air. The stylish people carrier banished the unpopular Premacy to the history books, with a fine driving experience, flexible seven-seat interior and handy sliding doors.

Since then, the 5 has proved to be an enormous success. It’s picked up an Auto Express award – best compact MPV in our New Car Honours 2006 – and the maker has regularly enjoyed around 6,000 sales a year. It’s a solid and capable all-rounder.

However, with the likes of the Ford S-MAX showing that you can make a truly desirable people carrier, the 5 has been left in the shade a little. So, Mazda has decided that now is the time for a few revisions. Don’t worry if at first glance you failed to not-ice the restyled headlights and tail-lamps, new front and rear bumpers, or even the Mazda corporate grille and fresh alloys. This is one facelift that is best described as ‘subtle’.

Still, the 5 is good-looking – particularly the top-of-the-range Sport Nav model we drove. As standard it’s equipped with a styling pack which consists of side skirts, sportier bumpers and attractive LED rear lights.

Inside, it’s a similar story, with only a few changes. In comes a new satellite navigation system on the variant we tried. The set-up boasts a smart seven-inch touchscreen display, and incorporates voice activation, as well as a rear parking camera.

All this comes at a cost, though – there’s a price increase of £625 over the outgoing version. All other models remain the same. Elsewhere in the cabin, it’s business as usual. The dash is clearly laid out, the gearlever sits nice and high for snappy changes while fit and finish is sturdy.

Mazda has left the excellent six-plus-one seating arrangement alone, and it’s easy to see why. The layout is brilliantly packaged, and comprises three rows of two seats, as well as a small, fold-out chair for occasional use. This seventh seat is a bit tight for an adult, although the cabin really is as practical as that of any rival.

The sliding doors are a big help when getting in and out of the car in awkward parking spaces, and buyers can now specify them with electric operation. The powered mechanism works quickly, in a mere five seconds, and stops if obstructed by an object.

As an added bonus, the doors can be operated remotely via the key fob. They are available as part of the Luxury Pack for Sport and Sport Nav models. It’s expensive, at £1,750, but it also brings xenon headlights and black leather upholstery.

Standard equipment is already generous, with 17-inch alloy wheels, a six-CD autochanger and climate and cruise control included on the Sport Nav. Base TS versions aren’t as well appointed, and do without alloys or even electric rear windows.

Under the bonnet, the engine line-up is carried over from the previous model. So buyers get a choice of 1.8 and 2.0-litre petrols, plus two 2.0-litre diesels. But tweaks have been made to cut CO2 emissions across the board, and there is a new automatic gearbox option for the 2.0-litre petrol.

The firm has also added new front and rear dampers in an attempt to improve the 5’s already respectable handling. Out on the road, our car’s 141bhp 2.0-litre turbodiesel engine provided a combination of impressive acceleration, excellent cruising ability and decent refinement.

With combined fuel economy of 46mpg and CO2 output now slashed from 173g/km to 162g/km, the diesel is sure to appeal to private and business buyers alike. The drop in emissions brings a £25 saving in annual road fund licence and sees the MPV drop two company car tax bands.

Despite the upgrade to the dampers, we didn’t notice a great deal of difference in the 5’s handling. The car still steers, rides and stops very well indeed. While it’s not quite as sharp as the S-MAX, the Mazda 3 underpinnings – which in turn are shared with Ford’s Focus – mean it delivers a composed and precise driving experience.