A growing family needs a bigger car. So after a 2 supermini and 3 hatch, the 5 MPV is the next Mazda for us to test! 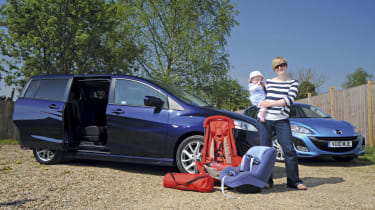 5
Saying goodbye to a car you’ve grown attached to is always hard, but it’s a lot easier when a shiny new replacement  is ready to slide into place!
The time has come for me to say a fond farewell to our long- term Mazda 3, but I’m furthering my experience of the brand by swapping it for a 5 MPV. That makes it a hat-trick, as my relationship with the Japanese firm started back in June 2009 when a green Mazda 2 arrived  in the Auto Express car park.
It suited me down to the ground as I nipped between my North London home and the Auto Express office in central London. With perfect timing,  it was swapped for the 3 hatch not long after I started a family and moved out of the city last June. And over the past 11 months, the 148bhp 2.2-litre diesel Sport has become a close and trusted friend for myself  and daughter Daisy. But just  as she is growing, so are my motoring needs, and the 5 could be the ideal solution.
So far, I’ve barely had the people carrier long enough to  use a tank of fuel,  but I’ve been eagerly awaiting its arrival  – and that’s not something I ever thought I’d be writing about a seven-seater! While I’m a big  fan of the 3 – with  its sleek styling, generous equipment list and superb economy – the Mazda 5 has even more gadgets and space.

I’ve been most excited about its extra load height, as Daisy  has recently celebrated her first birthday and seems to get heavier by the day. Being able to lift  her out of the people carrier with a straight back is already proving to be easier than bending into a low-slung hatchback… especially as the sliding rear doors open electrically.
The extra boot space is sure to come in handy, too, as the 3’s small 300-litre load area was its biggest weakness in my book. Our road test team highlighted this when they first put the five-door through its paces, and we have regularly filled it to the brim – or even taken a bigger car instead. In contrast, our buggy slides into the 5 with room to spare for the bags of baby-related kit that young parents invariably haul around with them.
I thought I’d miss the agile handling and lively responses  of the 3, but, while the 5 is  no sports car, it doesn’t drive  like a tall-riding people carrier, either. Its gearbox has a familiar rifle-bolt action, and I also recognise its alert responses  from behind the wheel.
I’ll keep you posted on the  fuel returns, but if the latest addition to our long-term fleet can get anywhere near matching the 41.4mpg economy of its predecessor – and replicate its incredible reliability and dependability – I know that  the latest step up the Mazda ladder won’t disappoint.

“It’s great to use a car as its designers intended, and the Mazda comes into its own when you start to use all of its seats. The electric doors sound like a gimmick, but their quiet operation is more pleasant for occupants when they’re being shut. Manual sliding doors tend to slam loudly.”