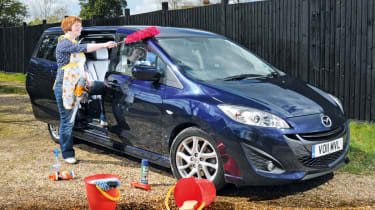 6
I’m done and dusted with my Mazda 5. We’ve spent a long and glorious year together, with the car seamlessly switching between thrifty workhorse and flexible family space.
It’s taken the edge off my monthly commuting bill on the one hand, and on the other it’s made carting my toddler, husband and associated paraphernalia around an absolute doddle at the weekend.
So as I reluctantly prepare to wave the 5 away, it seems only fair that the next owner should take delivery of it in the same pristine condition that it arrived in last spring. This doesn’t simply mean a deep clean, either.
With 13,000-plus miles on the clock, the 5’s first oil change service was due, so I headed to my local dealer, Milcars in Watford, Herts.
A few hours and £196 later, I was pleased to hear the Mazda had been given a clean bill of health. Plus, it had been cleaned inside and out.
No mention was made of the infrequent engine warning light problem that’s been the only dent in the 5’s so far unblemished record. Let’s hope this doesn’t develop into something more sinister for the next owner.

I was told the tyres were barely worn in, too. However, that’s hardly surprising given that the 5 is still wearing the Continental ContiWinterContacts fitted only four or five months ago.
I’d intended to swap back to the standard summer tyres while the car was at the dealer, as it would be up on the ramp anyway. However, the dealer wanted just short of £180 for this extra job – a whopping £100 more than Kwik Fit had previously quoted. So I’ll be saving that job for the high-street chain.
Even so, I’ll be sorry to leave the safety of the dealer network. This is my third Mazda in a row, and I’ve had little to complain about. The 5 in particular has been a great all-rounder; as practical as a pair of wellies, fun to drive and economical to boot.
Sharp handling, a slick shift and a surprisingly powerful 1.6-litre diesel have made light work of cross-country runs and long-distance motorway slogs over the past 12 months.
The car is packed with technology, too – including the handy, steering-wheel mounted cruise control, Bluetooth, heated seats and, of course, remote-controlled electric sliding rear doors.
They seemed a gimmick at first, but I quickly came to view them as a must-have for any busy mum on the move. I’ll miss these the most.
In exchange, I’m hoping my next car will feature a heated windscreen and a USB socket. And as a lot can happen in a year in the world of fuel efficiency, I’m expecting even more miles for my money. We’ll see what the future holds when the dust settles.

“The roomy cabin and seven-seat layout mean the Mazda is a brilliantly practical family car. Yet it’s the electric sliding doors that set it apart.”James Disdale, Road test editor

“I don’t doubt the Mazda is a great car – the previous model certainly was. But the old one also looked fabulous. This is a real backward step visually.”pajbse, via www.autoexpress.co.uk