Spring has sprung, and our Mazda 5 is set to blossom after a tough winter 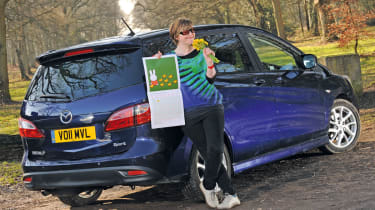 6
We’ve barely said goodbye to February and the daffodils have already made an early appearance to brighten life up. They’re not the only thing to put a spring in my step this month, either.
Against all the odds, and in the face of mockery from friends and family, my Mazda 5’s winter tyres have earned their keep in the short cold snap that was this year’s winter.
Temperatures plummeted to nearly -8 degrees Celsius out my way, in the heart of the Chilterns – well below the 7 deg C threshold at which my Continental ContiWinterContacts come into their own. The snow fell, and settled to an impressive five inches deep at one point – creating chaos in my local village and threatening to landlock anyone without a Land Rover.
Except me. The 5 shrugged off the slippery streets, ploughed through the snow and, with the help of its pokey 1.6-litre diesel engine, powered ahead as if it was business as usual.
Of course, the last laugh may have been on me, as neighbours bunked off and made snowmen with their kids in nearby gardens, while I effortlessly got into the office.

The Mazda was at its best in slushy conditions, where it generated remarkable cornering power and always felt stable and assured when braking. It was only when you got out of the car and almost slid on to your backside that you realised exactly how slippery the road conditions had been.
My husband even chose the 5 over a Mitsubishi Shogun one morning, when the weather was at its worst and he was heading out for the papers. He didn’t regret his choice, either. Even though the 5 was powered by two wheels, the grippy winter tread more than made up for any advantage a 4WD had when wearing inappropriate summer footwear.
But that all changes when the sun comes out. As the mercury rises, the cold weather tyres start to lose their edge. In everyday driving you probably wouldn’t notice the difference, but the summer tyres do provide sharper handling and cut stopping distances.
Which is why it’s now time to pack away the ContiWinterContacts, next to the fairy lights and Christmas tree, and shell out the £70 or so to have the Dunlop tyres that came as standard on the Mazda refitted.
The 5 is due a service shortly, too, as it nears the 12,000-mile mark. So it’s a good time for the local dealer to take another look at the engine. It’s had another wobbly moment since the car’s last visit, with the engine warning light flashing up momentarily on the dashboard when pulling away from cold.
Unfortunately, the dealer won’t be able to do anything about the fussy and confusing layout of the stereo, or the fact that there’s no standard USB socket for charging my iPhone. And while the stereo sounds good, I can’t understand why two of the six speakers are in the boot. You can’t hear them there.
However, these niggles haven’t really spoiled my enjoyment of the 5 so far. The car continues to impress as a versatile and engaging family runaround. If only it had a built-in vase for my beautiful daffs....

“It’s hard not to think of the MX-5 roadster when driving the 5, as the cars share the same beautifully weighted controls and rifle-bolt gearchange.”Ross Pinnock, Road test editor

“My Mazda 5 is a really tough car, which has had children, dogs and camping gear packed into the cabin, and bikes and roof boxes strapped to the exterior.”IronChicken, via www.autoexpress.co.uk