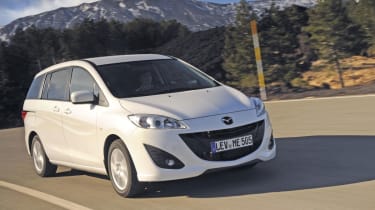 Mazda describes the 5 1.6D as the “perfect eco family car” – it’s not. But with low emissions, strong fuel economy, a hugely versatile cabin and an enjoyable drive, it has plenty of appeal as an MPV. Our main criticisms are that this model is a bit short on power, and a little noisy. Hopefully, the firm will introduce a more potent version in the future, as it did with the old 2.0.

We drove Mazda’s likeable 5 MPV last year - but now there's a new arrival under the bonnet in the shape of a brand new diesel engine. The 1.6-litre diesel is set replace the old 2.0. Despite being smaller, it’s more muscular, with an extra 5bhp, taking total power to 113bhp.
Improvements to fuel economy and CO2 output are even more impressive, with a 17.2 per cent jump to 54.3mpg, while emissions tumble from 159g/km to a mere 138g/km. On paper alone the 1.6D is off to a promising start, and things get better on the road.
Video: watch CarBuyer's video review of the Mazda 5
[[{"type":"media","view_mode":"content_narrow","fid":"68637","attributes":{"alt":"","class":"media-image"}}]]

It covers 0-62mph in around 14 seconds – which isn’t very impressive – but the maximum torque arrives earlier and is spread over a wider rev range. For everyday driving, that means the engine can feel surprisingly quick if it’s kept between 1,750rpm and 2,500rpm; this is where the 270Nm torque peak arrives.
Not only is the powerplant smaller, it’s mated to a gearbox that’s 45kg lighter. Overall, the seven-seater weighs 120kg less than before – and as a result it feels more agile. In bends, body roll is well controlled and there’s plenty of grip.
But while the steering is nicely weighted and precise, the driving experience is let down by a lack of feedback.
Customers looking for comfortable progress may be disappointed, too, as the 5’s ride is a little stiff. Also, the new engine can be quite noisy when it’s pushed.
The newcomer is as practical as ever, with the sliding rear doors – which can be motorised as an option – providing easy access to the second row of seats. This bench features a centre chair that can be stowed away to create a walk-through passage to the rearmost seats, or to carry long items of luggage.
There’s plenty of room for five adults, but the rear seats are only really for small children. Leave the chairs folded and the load area is impressive at 426 litres; once they’re in place, this figure plummets to 112 litres.
The diesel is available in TS2 or Sport trim, costing £20,650 and £21,950 respectively. Opt for the former and you get rear parking sensors, air-con and automatic lights and wipers. Sport trim adds leather seats and power sliding rear doors.
Nearly half the customers who bought the previous 5 chose the old 2.0-litre diesel – but we’d expect this 1.6D to be even more popular.
Rival: Ford Grand C-MAX
Based on the all-new Focus, the Grand C-MAX offers seven-seat practicality and is great to drive, too. It’s more expensive to buy than the 5, though.
Share this on TwitterShare this on FacebookEmail