The Mazda CX-30 is attempting to take on premium small SUVs from Mercedes and Audi, but can it impress the badge snobs? 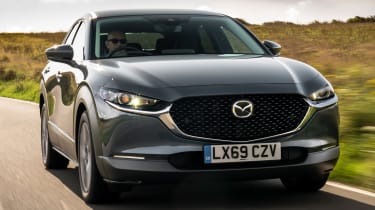 Resist any temptation to lapse into badge snobbery, and the Mazda CX-30 can genuinely compete on level terms with many premium compact SUVs. It’s great to drive, looks stylish inside and out, and feels expensive. However, it falls short against both premium and mainstream rivals when it comes to interior space and engine availability. If you value style and fun above practicality and flexibility, the CX-30 is well worthy of consideration.

This is the new Mazda CX-30. It’s been five months since we first drove the brand’s latest compact crossover, and since then it’s picked up a five-star Euro NCAP rating - including the highest adult occupant protection score the independent safety body has ever recorded. Now it’s time for our first opportunity to drive the car in the UK. But is it more than just a safe pair of hands?

CX-30 prices start from £22,895 for the SE-L car, and climb to £33,495 for the top-spec GT Sport Tech with all-wheel drive and an automatic gearbox. We’re driving what Mazda reckons will be the most popular variant: the 178bhp 2.0-litre, front-wheel-drive model with a manual gearbox. Before options, it costs £28,875 in GT Sport trim.

Mazda is trying not to pigeonhole the CX-30 in terms of rivals – slotting it neatly between the existing CX-3 and CX-5 in its SUV family. The likes of the Nissan Qashqai, SEAT Ateca and Toyota C-HR provide strong competition, but Mazda also wants to take a swipe at the premium alternatives like the Mercedes GLA and Audi Q2. 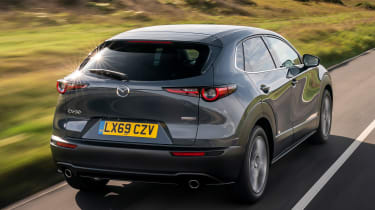 Calling the CX-30 a credible challenger to the German execs might seem ambitious, but a quick glance inside and out confirms that it really isn’t that far fetched. The clean exterior design is distinctive in an already crowded class, and while some might find the 4x4-inspired plastic cladding just a little heavy-handed, it’s a striking car overall.

And then you sit inside, and things just get better. The dashboard architecture is largely similar to that of the Mazda 3 hatch and, once again, it’s a wonderfully designed and finished cabin. The layout manages to strike a great balance between function and style - there’s as many buttons as you need for the everyday stuff, yet it still looks uncluttered and minimalist to the eye. As far as the parts that you will touch most frequently go, it’s great that the gear knob is a normal, round shape, and that the thin-rimmed steering wheel feels as fantastic as it looks. Overall, the interior of the CX-30 puts almost any mainstream rival to shame.

Though it does struggle when it comes to interior space. Rear headroom is fine, but anyone over six-foot tall will struggle for knee room. At 421 litres (1,398 litres with the back seats folded), boot space is adequate rather than spectacular.

At the other end, the CX-30 benefits from Mazda’s new Skyactiv-X petrol engine. The 2.0-litre unit uses spark-controlled compression ignition and a mild-hybrid setup; in short, it applies some diesel-inspired tech to reduce emissions while maintaining petrol-like performance.

While the engineering behind it is impressive, in reality it lacks one very useful feature that almost all of its rivals now have: a turbo. A naturally aspirated engine is fun in a lightweight roadster like the Mazda MX-5, but in a chunkier SUV it feels short of torque. At 224Nm, the CX-30’s peak is 26Nm down on a SEAT Ateca 1.5-litre turbo, but crucially the Mazda needs 3,000rpm to reach its maximum figure; the SEAT requires just half that. The Ateca also continues to deliver its peak torque right the way through to 3,500rpm.

Use the Mazda’s revs and brisk progress can be made, though: a 0-62mph time of 8.5 seconds is a match for the Ateca – it’s just that getting there can seem like hard work. 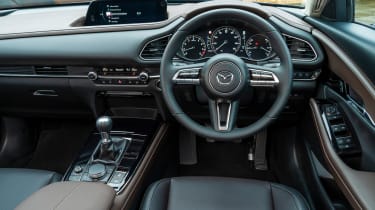 You’ll definitely need to work your way through the six-speed manual gearbox to get the best out of it, but with such a lovely shift that won’t feel like any hardship. The same goes for all of the other controls, too. Few cars in this class come close to delivering such well-judged and well-matched weighting of the gearshift, pedals and steering. It’s a trait that makes the CX-30 fun to drive, even if you’re just pottering about.

But one of the main reasons why Mazda reckons you should go for this engine is fuel consumption. We’ll have a more accurate real-world economy figure for you in an upcoming road test, but on our first UK drive, the CX-30 only managed an indicated 44mpg. That compares favourably to the Ateca TSI, but puts it some way off its diesel rivals.

Head onto a twisty road, and the CX-30 handles sweetly. Body roll is well controlled by SUV standards, with a little body roll making it clear that the tyres are reaching their limit. While the overall ride quality is more compliant than, say, a Volkswagen T-Roc’s, the Mazda can fidget more over smaller, higher frequency bumps. 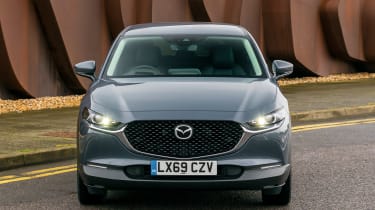 Equipment levels are strong throughout the five trim levels. The SE-L kicks things off with 16-inch alloy wheels, LED headlights, rear parking sensors, a head-up display, and an 8.8-inch infotainment system with navigation and smartphone integration. The SE-L Lux adds niceties such as a reversing camera, front parking sensors and keyless entry, while the Sport Lux gets 18-inch wheels and a sunroof, among other things.

The GT Sport brings leather upholstery, an electric driver’s seat and a Bose sound system, while the GT Sport Tech comes with a range of extra safety gear, including 360-degree cameras and front cross-traffic alert.

The Mazda remains competitive on a PCP finance deal, too. Using a representative three-year agreement with a £3,000 deposit, the GT Sport model we tried would cost £349 per month. On matching terms, the more practical but less well-equipped SEAT Ateca SE Technology 1.5 TSI is only about £8 per month cheaper.