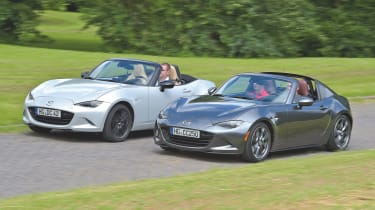 Getting up close and personal with the MX-5 RF showcases the slightly improved refinement and premium design. The fashionable Targa-style roof gives it an advantage in the style stakes, but we’ll have to wait until next year before we get behind the wheel ourselves. Still, our first impressions suggest it won’t be any kind of letdown.

When Mazda tinkers with the MX-5 it certainly doesn’t go unnoticed. The new “Retractable Fastback”, or MX-5 RF for short, caused quite a stir when it was revealed at the New York Motor Show back in March.

Rather than think of the RF as a hard-roofed drop-top like the previous MX-5 Roadster Coupe, consider it instead predominantly as a coupe but with an occasional supply of fresh air. This is our first taste of the RF as we get an exclusive preview from the passenger seat.

The focal point, obviously, is the roof. Pressing the button under the air-con controls starts the folding ritual, with it dancing away in four parts. The rear fins are raised, two roof segments disappear along with the rear windows, and then the fins return to position. It takes all of 12 seconds and can be operated at up to 6mph. 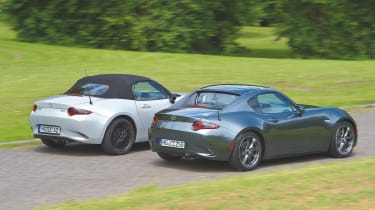 With the roof stowed, the rear section resembles the ‘flying buttresses’ that were a feature of the old Jaguar XJ-S. In the process Mazda has made the RF look more expensive than its expected £21,000 price when it goes on sale in the autumn.

Alongside the soft-top we brought for company, the RF looks incredibly sleek and is, to us, the more attractive MX-5.

Closed up again, and thanks to the insulated roof parts made of plastic, the Fastback is quieter and more comfortable than the soft-top roadster.

When driving the RF with its top down, the cabin can become a bit blustery. The absence of the small roof section isn’t the issue, it’s more the fact there’s no rear wind deflector; put down the windows and things become decidedly breezy. Perhaps a small wind deflector may well solve that issue, which has been promised on production models.

Mazda plans to offer the RF with a choice between the standard MX-5’s sweet-shifting six-speed manual gearbox or the six-speed automatic transmission that was fitted to our test car. The auto will make up just five per cent of RF sales in the UK. 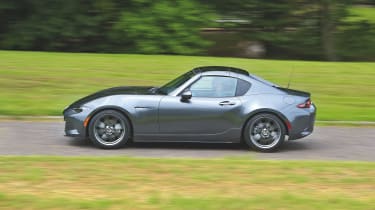 The self-shifter has a sports button in front of the gearlever to sharpen the throttle response and ferocity of gearshifts. Mazda has also tweaked the suspension and steering to work with the RF’s additional 40kg, so it’s softer than the standard roadster. Enthusiasts shouldn’t worry, though, as the RF is still a sports car.

The exclusive metallic matrix grey paint of our model makes it look as if it’s been cast from one piece of metal, while the central roof section can be finished in the body colour or gloss black.

The RF is expected to carry a price premium of round £2,500 over the soft-top MX-5, and order books will open some time in the autumn, with deliveries scheduled for early next year. We’d wager that the first RFs to hit the road will be admired as much as the MX-5 was in the early nineties.