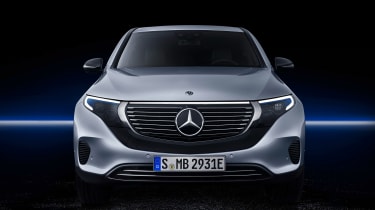 The Mercedes EQC is the first of 10 fully electric vehicles from the newly formed sub-brand and a rival for the Jaguar I-Pace. Also in the pipeline is an EQA electric hatchback and flagship EQS saloon, among with ‘several other saloon’ silhouettes, Auto Express understands.

Speaking at the 2018 Paris Motor Show, Ola Kallenius, Mercedes board member for research and development and future CEO, told us AMG variants of the all-electric EQ family are in the plan.

• Mercedes to slim down model range

“EQ is a product and technology brand for electric intelligence,” Kallenius explained, “but I can see a pairing between EQ and AMG as well.”

Mercedes-AMG’s first foray into the world of electrification will come with plug-in hybrid technology called EQ Power Plus. Kallenius described the powertrain as a “KERS system for performance cars” and is understood to comprise the firm’s 4.0-litre V8 engine with a powerful electric motor. It will launch in 2020.

A future AMG version of the fully electric EQC is likely to use the existing 80kWh battery and more powerful electric motors at the sacrifice of range. A power figure well in excess of the standard model’s 402bhp output is expected.

Get all the latest from the 2018 Paris Motor Show here...

Welcome to our Paris Motor Show hub page. Scroll down for all our Paris content...
New 435mile 2021 Mercedes EQS electric flagship to stand out next to new S-Class

All three Mercedes me apps now just need one login, and all three get a new look too