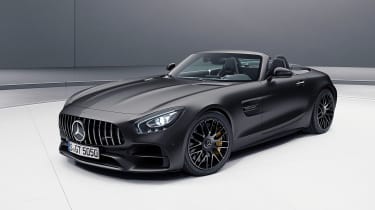 The headline act is the new AMG GT C Roadster Edition 50. Like its coupe equivalent – which made its debut at the Detroit Motor Show in January – it’s a limited edition model celebrating 50 years of AMG. Only 500 examples will be available worldwide.

The Edition 50 Roadster is available in two paint finishes – a graphite grey shade or cashmere white magno. Black chrome exterior accents are applied to the side skirts, the front splitter and grille as well as the rear diffuser, and line up alongside alloy wheels with black detailing between the spokes. 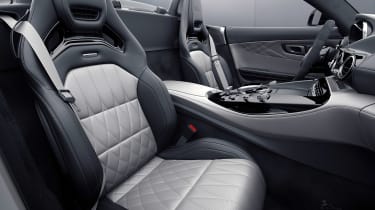 In the cabin, a contrasting black and silver colour scheme is applied, combined with the AMG Interior Night package which adds further black detailing. Power and performance remains unchanged. The 4.0-litre V8 bi-turbo engine produces 549bhp, enabling 0-62mph in 3.7 seconds and a top speed of 196mph.

Alongside the GT C Roadster Edition 50, Mercedes has applied the Night Edition treatment to the AMG C 43 Coupe and Cabriolet. Black exterior details, such as the tweaked radiator grille, trim elements on the front splitter, side skirts, rear apron, spoiler and exhaust tailpipes are matched with matte black 19-inch alloy wheels. Similar tweaks are found in the cabin. 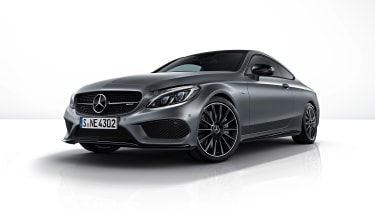 Limited to 150 units, the C 63 Cabriolet Ocean Blue won’t be coming to the UK, though the AMG GT C Roadster Edition 50 and C 43 Night Editions will be. Order books open in early March, with first deliveries in July and June respectively.

What do you think of the new special edition AMG models? Let us know in the comments!