We go dashing through the snow in the next-generation Mercedes-Benz A-Class to see how it's shaping up. 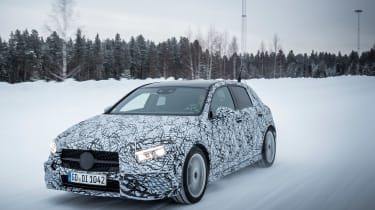 Bigger, smarter and more refinement and comfort, the A-Class demonstrated in our early ride that Mercedes-Benz has taken on board the criticism of the outgoing car. We’ll only know for certain when we finally drive it, but the A-Class looks like it’s going to be a tougher rival than ever for premium and mainstream hatchbacks.

“We’ve just done a calculation and we’ve driven over 12 million kilometres in the new A-Class,” says Jochen Eck, Senior Manager Vehicle Testing Compact Cars. We’re adding to that now, sitting alongside Eck as he works towards his ‘holy date’. Not Christmas, but instead the day when the A-Class is signed off for production. That’ll be early in 2018. We’ll see the new A-Class officially at the Geneva Motor Show in March, before then Mercedes-Benz drip-feeding its compact model’s new interior tech at the Las Vegas CES event this January.

What’s clear outside despite the swirling disguise is the new A-Class is bigger. There’s a 30mm stretch in the wheelbase, the car is 16mm wider overall and riding on track widths that are 14mm wider front and rear. The overall length grows by 120mm.

Eck admits that the growth’s benefits are numerous. Dynamically it’s a more stable platform as a result, allowing greater comfort, while the space increase inside is obvious. “I spend a lot of time sitting in the back, so you’re lucky I’m tall,” admits Eck.

That rear seat sits some 10mm lower than the outgoing A-Class, allowing enough head and legroom to allow me, at 5ft 11in, to sit comfortably behind 6ft Eck’s driving position. There’s greater shoulder room, but three across the back will remain a squeeze.

Up front the greater space is evident, too, helped by the dual-screen dashboard design which will be fitted across the entire line-up. The boot space grows by some 39 litres and now offers a capacity of 380 litres to match the load bay of the Audi A3. That more capacious boot is accessed by a larger hatchback opening, while the rear seats offer a 40/20/split fold function.

What’s clear, even in these prototype models we’re riding in, is the improved quality, as Mercedes-Benz guns for Audi in the interior stakes. There’s been a huge emphasis on the ride comfort, too, after Mercedes-Benz was stung by criticism of the outgoing car’s suspension.

Eck admits that the A-Class is all new, though the axle concept is carried over. That means a MacPherson strut front set-up and a five-point multi-link axle on the rear, fitted to Mercedes-Benz’s latest development of its MFA (Modular Front Architecture) platform. To that Mercedes-Benz has also added a less sophisticated torsion beam rear axle for use on less powerful editions.

There is the option of a sport chassis, which Eck admits is provided largely for looks; it rides 15mm lower than the standard set-up. Aiding the style is the fact that the new A-Class is able to accommodate wheel sizes up to 19 inches.

As standard the dampers are passive, with a selective damper system being optional. Choose it and you’ll have two settings: Comfort and Sport. Mercedes-Benz has discounted the use of more choices and prefers instead to have a more pronounced difference between the two settings. Eck says with the optional dampers in Comfort it’s more supple than those cars with the standard passive dampers, underlining one of the key development goals: improved refinement and comfort.

As a passenger and on the rough surfaces of this winter test in Sweden, the suspension is clearly better at small bump absorption, while refinement levels are high. Bigger crests and compressions underline the more sophisticated body control, though the torsion beam axle does take a little longer to settle after an admittedly unusual big bump compared with the multi-link set-up.

Eck concedes that, though also adds in most situations customers won’t be able to feel any difference. He highlights the steering as a marked improvement, too, in feel and weight, though we’ll have to take his word on that until we actually get into the driver’s seat ourselves. 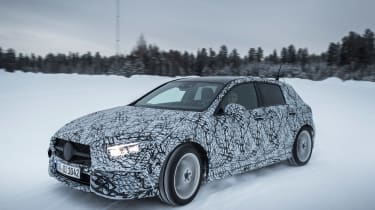 Road, wind and engine noise have all been targeted to fulfil the improved comfort goals, and the positioning and shape of the wing mirrors and a flat underside help the A-Class’s aerodynamics. New door sealing helps too, as does additional acoustic deadening material inside. It’s quiet, then, even in the testing conditions of Sweden.    Eck isn’t talking specifics on the engine line-up, but it will largely follow that of its predecessor, albeit while incorporating Mercedes-Benz’s latest units. The petrol range should offer a choice of 1.2, 1.4, 1.6 and 2.0-litre engines, all featuring stop-start technology and turbocharging. There will be cylinder deactivation and, on higher-powered models and AMGs, the expectation is of 48V electrics, boosting both performance and economy.

As standard the A-Class will feature a six-speed manual transmission or a seven-speed automatic. Most versions will be front-drive, although 4Matic will be offered optionally on higher-powered versions and as standard on AMG models.