The hard-top Mercedes AMG GT C sits centrally in the AMG GT range but does it represent the sweet spot? 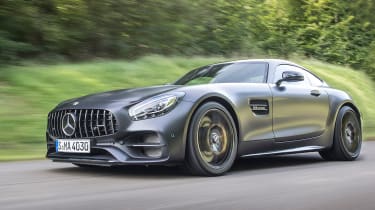 The GT C is perhaps the most complete AMG GT yet. It’s not quite as involving in a track situation as the GT R, but it’s a more exciting and engaging drive than lesser versions. What’s most surprising, is how civilised it can be when taking things easy on the road. However, at the price this Edition 50 spec car demands our money would go on the Roadster version that brings you closer to that addictive V8 soundtrack.

The Mercedes AMG GT was just one car two years ago, but the model line-up has expanded so rapidly since that the car maker now refers to it as the “AMG GT family”. With everything from the base 470bhp GT to the track-focused, 577bhp GT R, there’s plenty of choice to whet the appetite of sports car fans. But where does this middling GT C sit?

Essentially, the 550bhp GT C borrows some crucial elements from the GT R – the wider body and rear track, active rear-wheel steering and a portion of the extra power – to make it a more focused drive than the standard car, but it’s also supposed to be a more useable and subtle package. We’ve already driven the GT C roadster both in the UK and abroad, and came away mightily impressed on both occasions. Does the coupe version do anything to change our view?

Well, it’s £11,500 cheaper than the equivalent roadster, for starters. However, the coupe is only initially available in limited-run ‘Edition 50’ spec, marking fifty years of the AMG performance brand, whereas the roadster can also be had in standard form. Edition 50 brings matte grey paint, black chrome trim and wheels, plus quilted upholstery, but means the GT C coupe is just £1,400 less than a roadster without those trinkets. 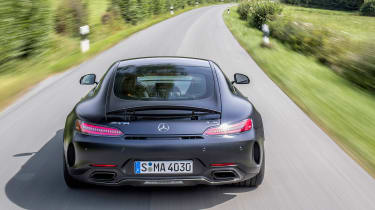 The coupe is also 70kg lighter than the hard-top car, on account of the removed roof mechanism and reduced chassis strengthening required. To be honest, though, you’ll be hard-pushed to notice the pounds shed on the road. What you will notice is the increase in boot space, making this a true long distance GT car.

But what makes this GT C a more appealing prospect than the (albeit improved for 2017) GT S is its breadth of dynamic ability. The stretched rear track makes it feel impressively planted and composed where lesser AMG GT’s lack finesse, scything through fast bends with barely any body movement. The steering is another real improvement – it’s still super direct, so takes a bit of getting used to, but there’s more feel and natural weighting than in this car’s cheaper siblings. All of this combines to make for a really confidence-inspiring experience, allowing you to jump from corner to corner, building speed and exploiting the grip.

The momentous traction, combined with the GT C’s near two-metre width, means this isn’t a playful, lairy AMG car. While it was a reasonably easy car to place on the road on our German test route, we suspect Britain’s narrow B-roads may make it seem more intimidating.

It’s far from straight-laced – and you can thank the engine for that. We’re very familiar with Affalterbach’s hand-made 4.0-litre twin-turbo V8, but it remains a dominating feature of the car. All 680Nm of torque arrives at 1,900rpm, and from there on the GT C builds speed with explosive urge. It rifles through the gears rapidly, particularly in the racier drivetrain settings, and despite a fairly modest 0-62mph time of 3.7 seconds, it feels every bit as accelerative in-gear as anything Porsche can offer.  It’s also impressively responsive for a turbocharged engine, and always wants to rip right to the redline. 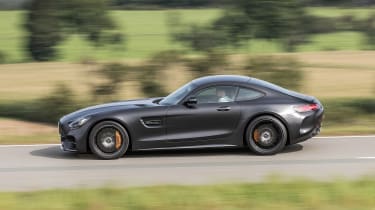 The speed is only half the story, though, as no AMG V8 would be complete without the trademark guttural soundtrack. The GT C’s unique exhaust tune means it’s even more vocal than lesser AMG GTs, snarling away from the line and offering up a cacophony of pedestrian-startling crackles and bangs when you lift off. It’s addictive, and provides an element of theatre that something like a 911 Turbo lacks.

Equally impressive is that once in comfort mode, with the adaptive suspension dampening the worst intrusions and the exhaust in its quietest mode, the GT C will cruise serenely all day long, allowing occupants to enjoy the lavishly-trimmed – if ergonomically flawed - cockpit. It’s still a firm car, but it manages to feel less jiggly than the standard AMG GT, although we’ll reserve full judgement on the ride until we get to try it on British tarmac. 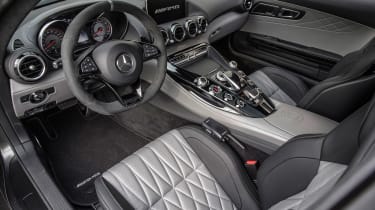 The only fly in the ointment that stops us recommending this particular GT C is that price hike caused in part by the Edition 50 spec. Mercedes will launch a standard version of the Coupe once that has sold out, and although money won’t be a great concern at this level of the market, the temptation of the similarly-priced Roadster makes that the GT C we’d choose for now.