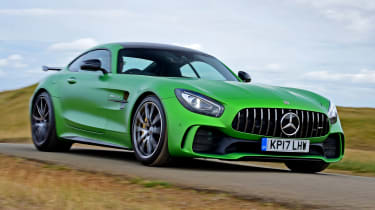 The AMG GT R lives up to its nickname and is a genuine rival to the best track-focused road cars on sale today. It’s frothing with character that gives it a distinct personality different from rivals, and that’s backed up by the way it drives. More involvement than its standard sibling, huge grip and performance, and a stellar soundtrack combine to make this one of the most appealing AMGs ever. This feels like another big step forward from the German performance brand.

Mercedes-AMG calls its new track-focused GT R “the beast of the Green Hell.” It’s no surprise once you learn the latter refers to the racetrack that influenced its development - the Nurburgring - and what a development process it’s been through.

The lesser AMG GT S has supercar looks but falls short dynamically, which is why the transformation into GT R has been so thorough. Mercedes’ customer motorsport programme in GT3 championships around the world has also contributed, so the GT R boasts wider front and rear tracks, blistered bodywork and a big spoiler, rear-wheel steering, tweaks in the engine bay, lots of carbonfibre, a nine-stage traction control system and recalibrated steering.

It’s a huge leap, but enough to make the AMG GT R a genuine rival to anything that’s emerged from Porsche’s GT car department. 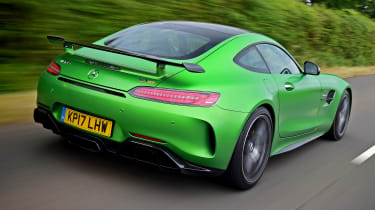 AMG’s are usually defined by their engine, and the importance of the motor is no different here. It’s the familiar 4.0-litre twin-turbo V8 that’s actually mounted way behind the front axle line (hence the huge bonnet), making the car front-mid-engined for better weight distribution.

It’s also been tweaked to produce 577bhp and 700Nm of torque from just 1,900rpm to 5,500rpm. You can thank new turbos and a revised engine map for the increased shove, which all helps to hurl the GT R from 0-62mph in 3.6 seconds. Acceleration is savage, thanks to all that torque, and given the power available, traction is surprisingly good.

With the ESP off, you can adjust the motorsport-inspired nine-stage traction control system, which works brilliantly and gives you options for different conditions on track. With it off the AMG does what AMGs do best, but you’d better be on your game, because the GT R will snap into oversteer fairly quickly, due to its focused chassis. There’s not much lock, but fast steering makes it easy to catch – or you can wind the traction dial back a few clicks.

The chassis is a match for the rampant engine, which bellows, cracks and bangs through a new exhaust system. There are five driving modes, finishing with Race. Here everything is ramped up to the max, and although certain suspension parameters are also manually adjustable, with the dampers in the firmest of their three electronically switchable modes, it’s stiff.

But it delivers excellent body control, rigidly tying the chassis down so you can drive the car with incredible precision, leaning on the massive grip from the front axle to carry adrenalin-spiking corner speeds. 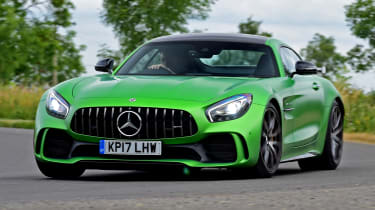 It’s helped by quick steering. The new calibration is definitely an improvement on the GT S’s and means the car feels less nervous. It’s still quite light, but the weight suits the character of the car, and while there isn’t as much feel fizzing back through the rack as in, say, a 911 GT3, it still offers a decent connection to the front axle.

With the extra agility from the AMG’s rear-axle steering, it means the car carves up direction changes. Up to 62mph the rear wheels turn in the opposite direction to the fronts, in effect shortening the wheelbase and turning the GT R into corners with very little effort.

There’s some clever aero management to complete the package, too. A new front grille helps cooling, while active aero on the underside moves around depending on the driving mode, to reduce lift at higher speed. The big rear wing and diffuser combine to help force those huge sticky Michelin tyres into the road for even more grip. 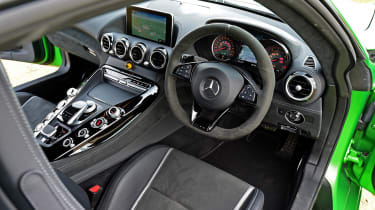 From behind the wheel, the result is plenty of stability, which is a welcome trait, given how much urge the engine has. This is even carried from track to road, on more undulating and less regular surfaces.

In Comfort the GT R is still undoubtedly hardcore. There’s plenty of tyre noise, but it’s genuinely usable because the sharp edges are rounded off bumps, making the whole experience just that bit more civilised. The gearbox is seamless as an auto, too; it swaps ratios without fuss and as quickly as any dual-clutch box on the market in manual mode.

There’s a usable boot with up to 350 litres of space, the two-seat cabin is appointed with Mercedes’ usual level of infotainment and quality materials and controls, and it’ll do a claimed 24.8mpg if you’re interested. At £143,260, most owners won’t be.

Instead, the modifications to the chassis and engine justify the price premium, while the GT’s enhanced stance, with that long bonnet and cab-backward layout, mean it looks every penny of that price.