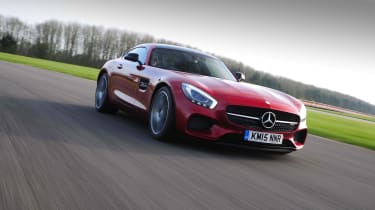 The Mercedes-AMG GT is a stunning car, with its driving experience dominated by the new 4.0-litre twin-turbo V8. Its instant responses together with the quick-shifting box deliver addictive acceleration, while the stiff chassis and fast steering mean it’s very entertaining to drive. Add in first-class cabin quality and head-turning looks, and Mercedes’ new flagship sports car is a worthy successor to famous cars of the past.

While Mercedes can trace its supercar history back to the fifties with the 300 SL Gullwing, the new Mercedes-AMG GT is something different. Instead of trying to one-up the brand’s last offering, the SLS AMG, the new coupe forgoes big numbers to take on more everyday sports cars, such as the Porsche 911 and Jaguar F-Type V8.

As a result, it’s around £90,000 cheaper than the SLS – although the flagship GT S still breaks the £100k barrier – plus it’s smaller and more efficient, too. Thankfully, performance hasn’t been compromised, and the new 503bhp 4.0-litre twin-turbo V8 engine helps the GT S sprint from 0-62mph in just 3.8 seconds and hit 193mph. These figures are similar to those of the SLS.

From the outside, the AMG GT looks purposeful, like a rounded-off SLS with some neat detailing. It’s especially menacing from the front, with a wide grille, huge Mercedes badge and distinctive LED headlamps and daytime running lights. 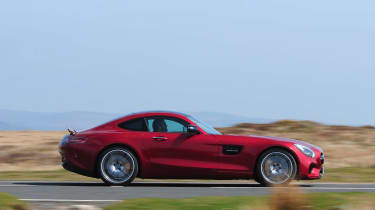 Unfortunately, the GT’s smaller dimensions mean it’s ditched its predecessor’s gullwing doors, but the upside of that is that the car is a lot easier to get in and out of.

When you do climb aboard, you’re greeted by a snug two-seater cabin that’s set well back, with a low-slung driving position and a high-set transmission tunnel. The gearlever is back by your elbow, but once you’ve put the GT into drive, it’s a redundant control, as you’ll either be shifting gears using the wheel-mounted paddles or letting the car’s electronics do the work. The view out is dominated by the vast bonnet, and while it reminds you of the powerplant underneath, it can compromise visibility when approaching a crest in the road.

Press the starter button, and the new V8 barks into life. As soon as you press the throttle, it’s clear that this unit is something special. In fact, it tends to overpower the whole driving experience, with a rumbling soundtrack at low speeds and a throaty roar when pushing on. Response is instant, especially if you select Sport, Sport+ or the optional Race modes, while the latter pair add an even louder exhaust note. 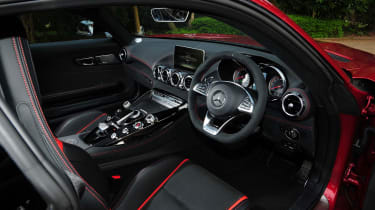 In a straight line, the AMG GT delivers phenomenal pace, with full-throttle upshifts easy to execute thanks to the short-travel shift paddles and instant response of the DCT twin-clutch transmission. Each shift is accompanied by a distinctive rasp from the exhaust, too, while lifting off from full throttle emits pops and bangs. With thatin mind, it’s safe to say that the AMG GT easily rivals the F-Type for aural thrills.

Head for a corner, and the steering delivers instant turn-in, although the wheel is extremely light and takes some getting used to. As a result, the GT tends to dart and weave when pushing on heavily crowned and undulating country roads. 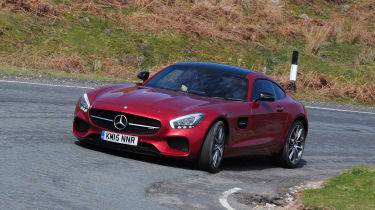 Once you’re in tune with the steering’s light nature and instant response, it’s easy to manage, while the stiff chassis and wide tyres deliver huge amounts of grip. However, turn off the traction control, and it’s easy to get the back wheels spinning. Plus, the fast steering means you can quickly catch any ensuing slide.

Our test car featured AMG’s Dynamic Plus Package, which adds firmer suspension, and while you can take it easy in the AMG GT, it never feels particularly settled, especially when cruising on the motorway. We’ll try a standard car soon, but with first-class cabin quality and plenty of standard kit, the compromise of the stiff set-up is something you’d be happy to live with.