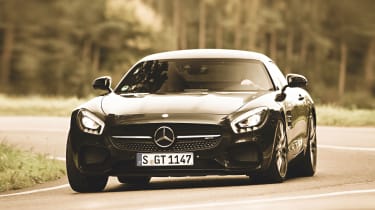 Our first impression of the GT S on the road has us salivating for the long-awaited drive: this agile, wieldly machine at last moves AMG into the heart of the true sports car sector. It certainly looks the part: small and aggressive, with beautiful retro touches. It sounds glorious, too – fear not about AMG’s new turbo era, in terms of noise and potency. The finish is also worthy of a six-figure tag. We can’t wait to get behind the wheel.

Mercedes will kick off 2015 with a bang by unleashing a new sports coupe: the AMG GT. Smaller and less expensive than the previous SLS AMG ‘gullwing’, it’s designed to steal sports car sales from fellow Germans and the Italians and Brits with a combination of uprated C63 power and stunning 300SL-alike looks. We’ve strapped in for a first impression.

To understand the new Mercedes-AMG GT – the flagship two-seater coupe sports car – you don’t need to pour over its specifications and statistics. Just press the engine start button on the huge central tunnel. An evil, tremendous sound erupts from the all-new twin-turbocharged 4.0-litre V8, effectively two A45 AMG hot hatch motors spliced together to create a ‘hot vee’ layout for minimum lag and a throaty AMG noise. 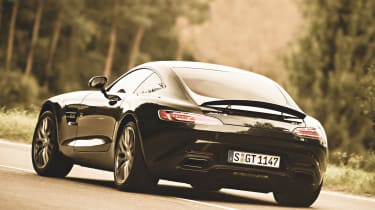 It leaves you in no doubt that the new AMG GT, here sampled in range-topping, 503bhp S guise, is built to have fun; nothing else. It’s a car busting with personality and character, and seems almost rebellious in a time when the rest of the Mercedes range – and the entire car industry – is looking to hybrids and automation to lower CO2 emissions.

Unfortunately, we’re not yet able to drive the low-slung, wieldy GT – but we have snuck a shotgun ride with the maker itself. Our driver for our first AMG GT experience is Bernd Schneider – five-time winner of the DTM touring car championship and victorious at the Spa 24 Hours, Nürburgring 24 Hours and Bathhurst 12 Hours in the SLS AMG GT. He knows a thing or two about getting the best from a truly athletic AMG – which is why he was actively involved in the development process of the new GT.

Shortly after the primal scream of ignition, the engine falls into a satisfied burble. This is the standard exhaust setting, which limits the noise in traffic to a socially acceptable level. Another button on that bulbous centre tunnel opens the pipes up into yob mode. 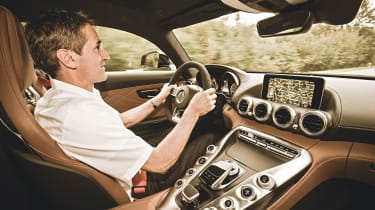 Not that this car has to be a hooligan all the time. This is a Mercedes, after all, and one called GT – Gran Turismo – at that. It has to be able to master a long trip. And from our time in the car, it seems AMG’s perfected that. Take the amazing, unpretentious ride. It’s more supple than that of a Ferrari or Porsche – the AMG is made of different stuff. Its cushions are soft, and the sports bucket seats offer a good compromise of body support and the necessary lateral support.

The twin-turbo appears to develop its power casually, serving up 650Nm from only 1,750rpm. Not that this is a ‘diesely’ engine at all – full power doesn’t arrive until 6,250rpm and the redline is 7,000rpm. The seven-speed dual-clutch box smoothes out the changes without jerking. It’s a serious athlete, not a muscle car – although we need to get behind that Alcantara and flat-bottomed steering wheel to replicate the grin Schneider is wearing across his face.

As we leave behind the city traffic and loping motorway for twistier roads, the GT begins to reveal its other, angrier side. Cycling through the driver modes via a dial on the centre tunnel sharpens the response of the front-mounted V8, and stiffens the suspension to create what feels like a proper little racer. 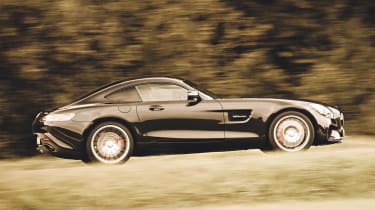 And then there’s the sound. Above 3,000rpm the volume begins to roar and produce goosebumps on both occupants. Schneider keeps his right foot buried on the gas pedal, pumping out an impressive acoustic set into the mountains surrounding Stuttgart. As he lifts off for a turn, snorting, bubbly sounds escape from the squared-off quad tailpipes. Cue more grins. Proper petrolheads – not accountants – have had their way developing this car.

Schneider is driving the GT precisely, right on its grip limit. Weight distribution biased 53 per cent towards the rear eradicates ugly understeer – there’s never been such a sporty, serious Merc as this. “I’ve never driven a road car with better balance”, says the driver. To prove his point, he switches off all the aids by pressing the fourth driver-focused toggle on that centre tunnel. Braking as late as possible, then stamping hard on the gas, the traction is absolute.