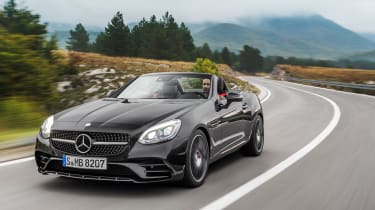 Sitting at the top of the range doesn’t automatically make the AMG 43 the best SLC money can buy. The tuning arm’s new V6 bi-turbo motor makes a solid initial impression, but the car’s dynamics are found wanting by today’s standards. It’s expensive, too, making the four-cylinder SLC 300 look like somewhat of a bargain.

If the Porsche 718 Boxster sits at one end and the Mazda MX-5 at the other, the SLC 43 AMG should be elbowing its way into any argument for the best ‘affordable’ roadster money can buy.

All the ingredients are there. It’s the first car with AMG’s new 3.0-litre V6 bi-turbo engine. With 362bhp and 520Nm of torque, the motor is lighter and more frugal than the naturally aspirated V8 it replaces, and mates to the family’s nine-speed automatic, retaining the SLK’s rear-wheel drive setup.

That’s only part of the story, though. The AMG SLC 43 isn’t built built by AMG at all. Now it’s “engineered by Affalterbach”, which isn’t quite the same thing. 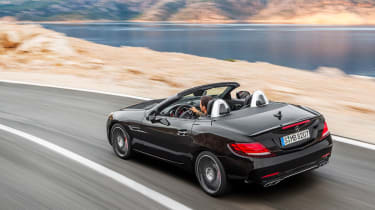 Sure, the core architecture is a bit old fashioned, but it’s been fiddled with AMG-specific engine and rear-suspension mounts, new front and rear axles and stiffer steering knuckles. And there are options for dynamic active dampers and a limited-slip differential, too.

Up front you’ll find big 360mm brake discs, with four-piston fixed calipers, and 330mm units at the back – both covered by 18-inch wheels. Electromechanical speed-sensitive power steering and the usual dazzling array of Benz safety electronics also feature. There are driving-style electronics, too, including the master control for Eco, Comfort, Sport, Sport+ and the customisable Individual mode.

So, on paper, it’s all there. Especially when you consider its 0-62mph sprint of 4.7 seconds and 155mph top speed. 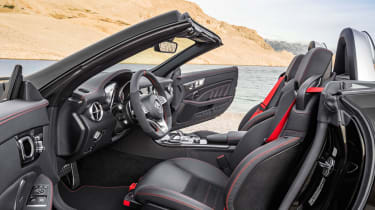 The motor itself sounds convincing when you crank it over and it settles into a smooth, calm, deep idle at steady speeds. It’s reasonable around town, too, despite lacking that unspoken menace that the best AMG motors evince without trying.

It’s strong without being urgent and surging without instantly responding to the throttle like its predecessor did. But to get AMG sound, you need to have it in one of its sportiest settings and, even then, you’ll only make the connection on the burble and crackle of the overrun, rather than charging hard at full throttle. But while it’s not quite the belligerent hand-grenade we expect of AMG, the 3.0-litre V6 isn’t at the core of the SLC 43’s problems.

The car’s main shortfall – and it’s a big one – is that power and torque ask questions the now-dated chassis architecture can’t answer. 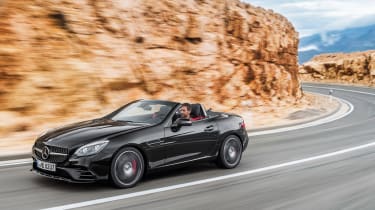 The windscreen surround shudders at slow speeds, and even moderately skilled drivers will feel its body frame wobbling over mid-corner bumps. The front end flexes under firm braking or on hard turn-in – even on almost-perfect road surfaces – while the steering wheel jiggles in concert.

The car feels less organised with more pace on board, ultimately ending up with the skid-control system flashing so early and so often that the brakes smoke up.

On pieces of road that aren’t power dependent, like steep descents, the four-cylinder SLC 300 makes a mockery of the price and power differentials. You can turn the electronic systems off, but that just brings chirps of rubber from both ends even with no throttle on board. 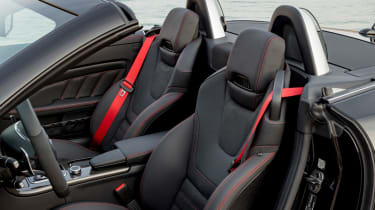 It never instils the confidence needed to carry the fight to the Boxster through corners, and whilst it can be forced into hustling quickly you know that this is something it should be doing willingly, rather than being coerced into it.

Its interior is a pleasant place to be, though, and like the diesel we drove last week the infotainment system has been upgraded with a seven-inch display, internet access and two USB ports. A new 4.5-inch TFT display screen now sits behind steering wheel, too.

It also carries over new Intelligent LED Lights, while the Adaptive Highbeam Assist Plus system, which lets you remain on high beam and still not dazzle oncoming traffic, is an option.