We deliver our verdict on diesel flagship estate - does the fresh-faced C-Class have what is takes to compete with German rivals? 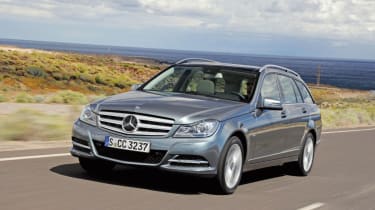 The changes to the C-Class seem subtle, but they add up to a thorough facelift that helps the car compete with the best in the business again. The Estate’s boot is as large as an Audi A4 Avant’s, even if the parcel shelf is a little frustrating, while the reworked V6 diesel engine is impressive. It’s expensive, but combines muscular pace with manageable running costs. Plus, the interior is a significant step forward. It all makes for a very tempting proposition.

The CLS isn’t the only Mercedes turning on the style – the bestselling C-Class has been given a revamp, too! We drove the petrol saloon before – and now we’ve tried the top-spec C350 diesel estate. It arrives in the UK in June, so is it worth waiting for?

The newcomer retains the previous load carrier’s handsome proportions, while the swept-back headlamps, lighter aluminium bonnet and revised bumpers bring it in line with the latest family look.

Inside, the biggest changes soon become apparent. All the cabin materials are improved, and the C-Class now shares the same high-quality feel as more luxurious Mercedes. The three-spoke leather steering wheel is lifted straight from the new CLS, the centre console now curves towards the driver and the COMAND multimedia system is fully integrated into the dash.

There’s also a host of new safety kit, taken from bigger models like the S-Class, with 10 new passive and active systems, including Lane keep assistance and radar-guided cruise control. Once up and running, it’s the C350’s revised 3.0-litre engine that really grabs your attention.

It delivers 31bhp more power, at 261bhp, and there’s 620Nm of torque available from as low as 1,600rpm. This gives the estate crushing performance. It sounds good, too, yet with Mercedes’ BlueEFFICIENCY tech – which incorporates stop-start – fitted as standard, the car is more frugal than before. It claims 47mpg combined fuel economy and emits a company car-friendly 154g/km of CO2.

The updated 7G-Tronic automatic box is as smooth as ever, and although it’s more comfortable slushing through the ratios in auto mode then making quick changes, it’s well suited to the C350’s relaxed character. Similarly, the suspension is geared towards comfort – even in the Sport version that most UK buyers opt for – and it makes for capable rather than thrilling progress.

As a practical estate, the C-Class is less successful. The load bay provides a generous 485 litres of space with the seats in place, but because the parcel shelf is screwed to the backs, freeing up the maximum 1,500-litre capacity is a tricky and time-consuming operation.

This isn’t the only niggle. The rear bench is slightly firm and uncomfortable, and the COMAND control system still isn’t as intuitive as Audi’s MMI set-up. These gripes take some of the shine off an otherwise very appealing package. But while BMW and Audi both have fresh mid-sized saloons waiting in the wings, for now, the new C-Class has put itself ahead of the pack.

Rival: BMW 335d Touring The 3-Series is starting to show its age – but the 335d strikes a better overall balance between ride comfort and driving fun than the C-Class. Yet it’s not as cheap, clean, spacious and upmarket as the latest Mercedes.