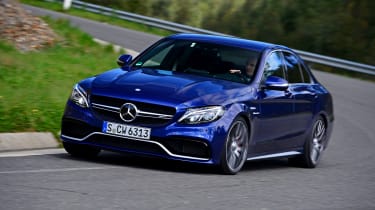 On this showing, the Mercedes-AMG C 63 S sets a new benchmark for supersaloons. As with its predecessor, it’s fun to drive and packed with character, but the new 4.0-litre engine raises its performance potential to another level. Better still, the blistering acceleration goes hand-in-hand with lower running costs. Factor in decent practicality, top-notch quality and the availability of an Estate version, and the AMG is almost unrivalled in this class.

If your idea of a supercar is a low-slung, exotic two-seater with a mid-engined layout and wild styling, then the new Mercedes-AMG C 63 S will set your head spinning. Here’s a car that wraps a thumping 503bhp V8 engine into a sensible saloon body and can carry a family of five in comfort.

Of course, the concept of a souped-up family saloon is nothing new, but this all-new second-generation C 63 aims to be the fastest and most thrilling yet. Featuring a tweaked version of the sophisticated twin-turbo V8 that made its debut in the stunning Mercedes-AMG GT, the muscular newcomer is available in either standard 469bhp trim, or in wild 503bhp S guise, as driven here.

Both models promise astounding performance, with the latter sprinting from 0-62mph in a blistering four seconds flat and, if you opt to have the speed limiter removed, hitting 180mph.

Yet what’s really remarkable about this car is that AMG engineers have managed to combine this acceleration with claimed economy of 34.5mpg and CO2 emissions of 192g/km.

Despite packing such a hefty punch, though, the C 63 S doesn’t shout about its potential in the same way as rivals such as the BMW M3. In fact, at a glance you’d be forgiven for mistaking the newcomer for a standard C-Class. Look closely, though, and you’ll spot the deeper front bumper, which takes its cues from the larger E 63, the subtle power bulges in the bonnet, and the neatly flared front wheelarches which cover a front track that’s 31mm wider than the standard car’s. Meanwhile, at the rear, you’ll discover the well integrated quad exhaust set-up.

Changes to the interior have been kept equally low key, with the biggest updates being the addition of a bespoke AMG instrument cluster, a thick-rimmed flat-bottom steering wheel and a pair of heavily bolstered sports seats. The rest of the cabin is pure C-Class – with slick design, plenty of standard kit and a top-quality finish. It’s reasonably roomy, too, with decent head and legroom for those sitting in the back, plus a 480-litre boot. If you need more room, you can pay £1,200 extra for a practical Estate version. However, most C 63 owners are more interested in pace than space – and on that point, the newcomer doesn’t disappoint. 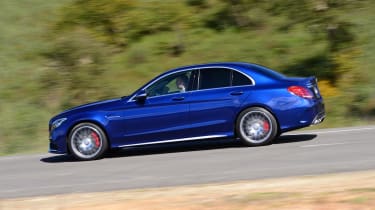 By cleverly packaging the 4.0-litre engine’s two turbos in the ‘V’ between each bank of cylinders, AMG has created an engine that’s more powerful and efficient than before, yet has lost none of the responsiveness or appetite for revs that marked out the old car’s naturally aspirated 6.2-litre V8. Twist the key in the ignition and the bi-turbo powerplant bursts into life before settling down to a burbling idle.

As you’d expect from a car that delivers 700Nm of torque at only 1,750rpm, performance is electrifying. It doesn’t matter what gear you’re in, the slightest prod of the throttle will catapult the Mercedes down the straights. Few cars at any price feel as potent in the real world as the C 63 S. Even better, the engine backs up this incredible performance with an equally impressive soundtrack, particularly if you specify the £1,000 optional sports exhaust. At low revs there’s a bassy V8 rumble, but close in on the 7,000rpm red line and you’re treated to a full-blooded bellow. Lift off and the four exhausts emit a pleasing gurgle and pop on the overrun. 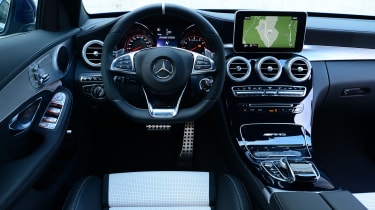 The only negative is the seven-speed automatic gearbox. It’s smooth and delivers quick changes most of the time, but it can be a little slow to respond to the gearshift paddles when you want really fast changes.

So the C63 is fast and loud in a straight line, but does it deliver in bends? AMG has worked hard on the suspension, which is 25mm lower and features stiffer springs, thicker anti-roll bars and adaptive dampers. The electrically assisted steering has also been recalibrated, while drivers can choose from Comfort, Sport, Sport+ and Race driving modes. Finally, a limited-slip differential – mechanical on the C 63 and electronically controlled on the S – helps put all that power down on the road.

The good news is that all this hard work has paid off, because the C 63 feels incredibly poised and agile. The steering is direct and naturally weighted, plus there’s loads of grip to lean on, even during extreme cornering. Body control is excellent, too, particularly with the dampers in their sportiest settings, while the traditional rear-wheel-drive layout allows you to adjust the car’s line using a combination of steering and throttle. 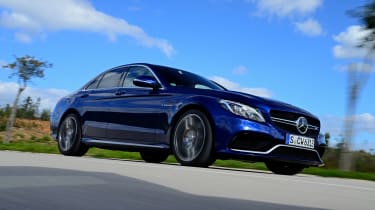 Of course, with so much power and torque on offer you need to be cautious with throttle applications out of slower bends, but the three-stage stability control system cuts in smoothly to keep any wayward behaviour in check. Switch the safety aids off, however, and it’s possible to indulge in smoky tailslides.

When you want the fun to stop, the powerful brakes bring the C 63 to a halt in an eye-poppingly short distance. For even greater stopping power, the S can be fitted with £4,285 fade-free carbon ceramic brakes.

If you’re wanting to travel at a more sedate pace, the C 63 S is transformed into a relaxed cruiser at the touch of a button. The ride is a little firm over bumpy surfaces, but road and wind noise are well suppressed, plus the mighty V8 settles down to a background hum. This really is a supercar for all seasons, and all occasions.