Merc set to take aim at the BMW M4 GTS with its new Mercedes-AMG C 63 'R' coupe, and we've spotted it at the Nurburgring 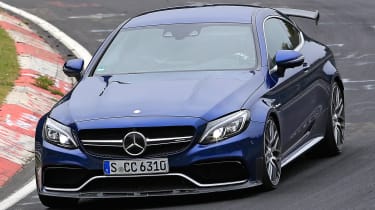 Mercedes-AMG appears to be working on an even faster and more hardcore version of the C63 coupe. Spied completely undisguised at the Nurburgring the test mule sports some rather obvious additions such as the huge rear wing, indicting that this could be Merc’s answer to the BMW M4 GTS.

The changes that can be picked out on the prototype all focus on aerodynamics and increasing downforce. The rear wing is the most obvious addition, but look closer at the front and a more prominent front splitter with winglets can also been seen. 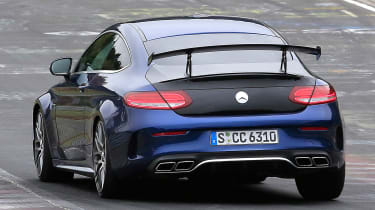 The black bootlid could also indicate that Merc is playing around with new body panels, specifically carbon fibre to help shed excess weight. Like the M4 GTS, the Mercedes could also do away with the rear seats in a bid to reduce its near 1,800kg kerbweight even further.

But a performance model wouldn’t be complete without some tweaks under the bonnet. The most powerful version of the 4.0-litre twin-turbo V8 in the C63 is found in the S model, developing 503bhp. Yet Merc recently launched the AMG GT R which packed 577bhp, so there is clearly a lot more scope for extra grunt in the coupe.

There are likely to be further changes beneath the surface, too. Stiffer springs and dampers would give better performance on track, while stickier and more aggressive tyres are a relatively cost effective way of improving performance. When the hardcore C63 arrives expect it to be produced in very limited number.

What do you think of a harder-edged Mercedes-AMG coupe? Leave us a comment below...