The latest Mercedes CLA is so much more than a rebodied A-Class hatch. Its wider track means it’s genuinely engaging to drive, while its achingly cool design should turn plenty of heads in the company car park. Available only in AMG Line trim, this new four-door coupé is expensive, but its glorious interior and mini-CLS shape more than make up for any shortcomings in practicality. But we prefer the CLA 200 petrol model, because it costs less to buy, is decently economical and even quieter on a run.

The Mercedes CLA first arrived in 2013, immediately cementing its place as the A-Class’s cooler cousin. But the original wasn’t without its flaws – so instead of producing another rebodied hatch, the German firm has made some bigger changes to the CLA this time around.

As well as designing a sleeker, more stylish shell, Mercedes has widened the CLA’s track front and rear in an effort to boost engagement. It should also help engineer some clean air between the car you see here and the forthcoming A-Class Saloon.

While you may not think that widening the track by 63mm at the front and 55mm at the rear would make much difference, the new CLA feels tangibly sharper on the road. It responds directly to your inputs, with very little body roll through corners. 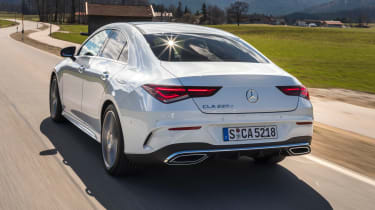 Our first experiences of the model came courtesy of the CLA 220 d, which goes on sale shortly after the petrol variants arrive in late April. Every UK car will come in high-spec AMG Line trim, with no cheaper SE or Sport models available for the time being.

The diesel engine is strong, with a great surge of torque available from low revs. The eight-speed automatic transmission (lesser CLAs get a seven-speed auto) is responsive and smooth, too, meaning there’s little requirement to take charge using the steering wheel-mounted paddles.

We also tried the CLA 200 petrol in not-for-UK ‘Progressive’ trim, because it’s likely this engine – along with the cheaper CLA 180 – will prove popular with British buyers. Just as it does in the A-Class, the 1.3-litre turbo feels punchy, with enough performance to handle both town and motorway journeys. 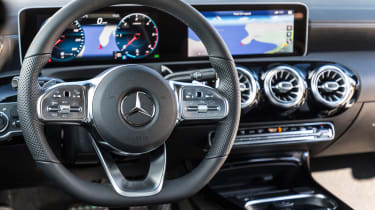 That slippery shape makes for excellent refinement. As with its predecessor, the new CLA is the most aerodynamic car in its class, allowing it to scythe through the air with little in the way of wind or road noise. In petrol guise, the CLA is just as refined, if not more so, than the larger C-Class. It rides nicely, too. Every UK car will get lowered comfort suspension, and while we were unable to try an exact replica of this set-up on the European launch, on adaptive dampers the CLA remained largely unfazed. Even on our car’s larger wheels, the four-door coupe sets a high benchmark for long-distance comfort and composure.

Elsewhere, the CLA carries over the A-Class hatch’s fantastically plush interior, and due to this car’s generous standard kit list, the wider central screen comes as standard. You’ll need to upgrade to AMG Line Premium (£1,495) to get the larger dials, which create the illusion of a single pane of glass spanning right to left. Every new CLA gets LED lights, privacy glass, leather sports seats and two-zone climate control, however, as well as keyless go, sat-nav and wireless phone charging.

So far, the CLA seems to have justified its £3,170 premium over the A-Class. But when it comes to practicality, the hatch claws back some of the ground lost to its stylish sibling. Climb into the back and it won’t take a particularly tall adult to note that headroom is rather restricted thanks to the roofline.

Likewise, the boot is bigger on paper, but isn’t as usable. The 460-litre load bay is a decent size – and the rear seats fold in a 40:20:40 formation – but the narrow opening and saloon-style bootlid mean it’s just not as versatile in daily use.

Mercedes has confirmed the CLA 180 will cost from £30,550, but Benefit-in-Kind rates and PCP figures will be calculated when prices are announced in full in May.