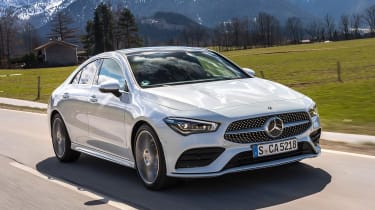 As with most Mercedes models, there’s a large range of engines to choose from when ordering a CLA. The overwhelming majority of these are petrol engines; 1.3 and 2.0-litre units with a variety of outputs. Economy is reasonable across the board, but it’s the CLA 220d diesel that’s the best choice of the fossil fuel versions, if low running costs are your primary concern.

However, the top performer across the range for economy is the 250 e plug-in hybrid. Mercedes claims that, with regular charging, the 250 e is capable of returning up to 282.5mpg on the combined cycle. It also has an all-electric range of up to 44 miles, with a top speed then limited to 87mph.

The CLA 180 and CLA 200 are simultaneously the most efficient petrol-powered models in the range; each uses the same 1.3-litre four-cylinder engine, tuned to 136 and 163 respectively, but economy and emissions are identical: 42.8-47.9mpg and 126g/km of CO2. Each commands a 29 per cent BiK charge. 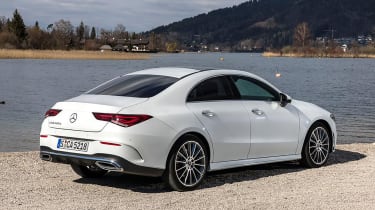 The lower-powered 2.0-litre doesn’t lag too far behind with its 38.7-42.2mpg and 138g/km of CO2 (equating to a 31 per cent BiK rate), but adding the optional 4MATIC four wheel drive system will see these figures drop to 36.7-40.4mpg and 148g/km respectively. Opt for the more powerful, front-drive-only CLA 250 and efficiency takes a further drop, although its 38.7-42.2mpg and 138g/km of CO2 are not terrible given the performance on offer.

Opting for either AMG model means sacrificing economy in the name of performance. The Mercedes-AMG CLA 35 4MATIC returns 34.9-36.7mpg and emits 164g/km, enough for a 36 per cent BiK rate. These figures aren’t terrible for such a potent hot hatch, however. The full-fat AMG 45 S 4MATIC+ is even more powerful and so returns 33.2-33.6mpg, with a hefty 189g/km equating to the maximum 37% BiK charge.

The Shooting Brake versions of each of these is marginally less efficient, with CO2 emissions and therefore BiK ratings rising ever so slightly for most engines. Claimed fuel economy also takes a slight hit, but the differences in actual use will be marginal.

It pays to note that while prices start below the £40,000 VED surcharge threshold, some CLA models will breach it with a few options added and yearly payments will increase drastically.

The CLA roughly occupies insurance groups 27 to 43 depending on which model you choose; the CLA 180 petrol is the cheapest to insure and the AMG models are the most expensive. The CLA Shooting Brake sits roughly within groups 26 to 39.

According to our experts the CLA Coupe will retain up to 45% of its value after 36,000 miles and 36 months come trade-in time; the Shooting Brake should keep around 48% over the same period.