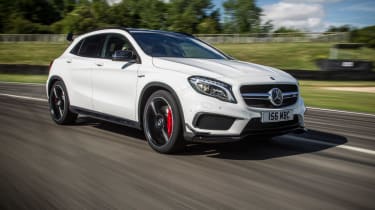 The Mercedes GLA 45 AMG is a genuinely interesting performance car. On the road, it offers 99 per cent of the fun of its A45 AMG stablemate, but is much easier to live with every day. And while it may not quite be the SUV that Mercedes claims it is, the chunky looks certainly make it stand out in the performance hatchback crowd.

The Mercedes GLA 45 AMG is the third AMG model to get the tuning arm’s 355bhp four-cylinder 2.0-litre turbo.

And even though its higher driving position and extra weight mean it’s never going to be quite as sharp as the A45 and CLA 45, it could be the best of the three for UK buyers. That’s because it offers improved practicality, comfort and everyday usability for a negligible loss in performance and handling.

But arguably the main reason to go for the GLA 45 is how it looks. Mercedes claims this AMG is a performance ‘SUV’, yet it’s positively dwarfed by an Audi RS Q3. Even a Ford Focus ST is taller. Slip into the supportive AMG sport seats, and while the bonnet may seem raised up, you never feel as though you’re sat above normal traffic, even though you are 40mm higher than in an A45. 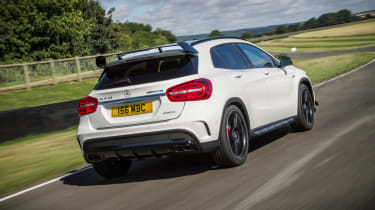 There’s no debate about the GLA 45’s sporting potential, though, thanks to the usual array of AMG styling upgrades – the twin blade grille, AMG front apron, 19-inch alloys, side skirts and rear diffuser. The £1,530 AMG aero pack, which adds a huge roof spoiler and front splitter, and £1,150 AMG night pack, which includes 20-inch alloys in black, give the GLA 45 even more presence.

Yet despite its increased size, more spacious back seats and usable boot, the car is only 40kg heavier than the A45, and so its 0-62mph time of 4.8 seconds is just 0.2 seconds slower.

The GLA 45 gets the same AMG Speed Shift DCT-7 dual-clutch box and 4MATIC all-wheel-drive, which can send up to 50 per cent of the power to the rear. You’ll want to pay the extra £470 for the sports exhaust, too, which sounds great.

The GLA 45 features beefed up anti- roll bars, stiffer steering knuckles and a grippier wheel geometry set-up than the standard car. It also has AMG-tuned speed-sensitive steering, which feels responsive and natural considering its an electrically assisted system. 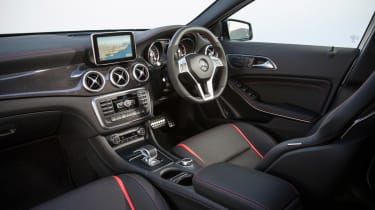 The AMG performance brakes are impressive, too. They include cross-drilled ventilated discs all round and do a great job of hauling the car’s 1,510kg to a halt.

And this is reassuring to know, as the GLA 45 covers ground pretty much just as fast as its smaller brother. The slightly taller ride height means there’s a tad more roll in corners, and you don’t feel quite so connected to the road.

But point to point most people will be no quicker in an A45 – AMG says that at eight minutes, 11 seconds, the GLA 45 is just a few seconds slower round the Nurburgring. This is largely irrelevant – what really matters is how the GLA 45 combines storming performance and head-turning looks with real world usability.