Does Mercedes GLC SUV have the credentials to take the fight to the BMW X3 and Audi Q5? 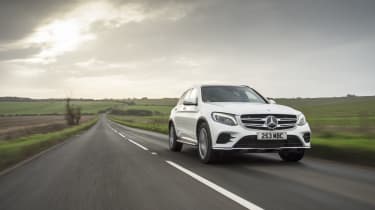 The GLC couldn't have come sooner for Mercedes. While the BMW X3 and Audi Q5 have been flying out of dealerships for years, Mercedes has been left twiddling its thumbs with nothing in the shape of a mid-sized SUV to sell. The GLC takes the best bits from the C-Class and packages them in a practical, luxurious and handsome 4x4 body to produce something that is sure to put a dent in both Audi and BMW's SUV sales.

The mid-sized Mercedes SUV is a rare beast on UK roads. Until now, we've only had the massive GL-Class in this country - the old GLK never made it to Britain because of difficulties converting it to right-hand drive. The new GLC attempts to remedy that, though, being a sharper, sleeker and more practical successor. We've been behind the wheel for the first time on UK roads.

The GLC we have here is the 250d model, the more powerful of the two diesels on offer. It delivers 201bhp from Mercedes tried-and-tested (some might say elderly) 2.1-litre four-cylinder diesel engine. There's also a cheaper 220d model which makes 168bhp from the same engine, but both cars claim identical economy of 56.5mpg. 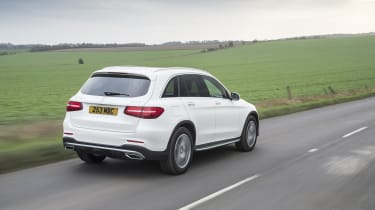 Wrapped in racy AMG Line trim and its accompanying bodykit, the GLC certainly doesn't come cheap. It's priced at £39,595 before you start adding any extras - a similar spec BMW X3 will cost around £2,500 less.

However, the car begins to make up for its hefty price tag inside, where it's classy and functional. The cabin design is lifted straight from the C-Class, but there's a level of craftsmanship in the fit and finish that you don't get in an X3 or the ageing Audi Q5.

A slightly more dated area of the GLC is its engine. The 2.1-litre diesel has been popping up in Mercedes' new models for years, and it's often criticised for its lack of refinement. Still, you're far better isolated from the gruff diesel drone here than in a C-Class, for example. That's helped by the standard nine-speed automatic gearbox, which has been installed to maximise fuel economy and minimise engine noise. The transmission does a good job of clawing its way through its nine ratios as quickly as possible - pulling just 1,500rpm at 70mph. Stab the throttle, and there's a brief pause before the car decides which is the most effective gear for the task in hand, but then it glides smoothly down the road. It doesn't feel as brisk as its 0-62mph time of 7.6 seconds suggests, yet it's fast enough. 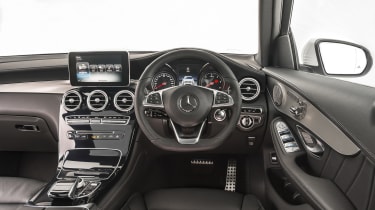 The ride isn't as supple as you'd expect from an SUV of this size, plus the 19-inch rims don't do it any favours, either. But air-suspension is offered in the GLC as a £1,495 option, which may be worth considering if you're after an S-Class like cushioned ride.

Body control is very impressive, though. The Mercedes doesn't lean and lurch over on faster bends; we just wish the numb steering provided a bit more feedback.