The Mercedes GLE majors on comfort, especially when riding on air suspension 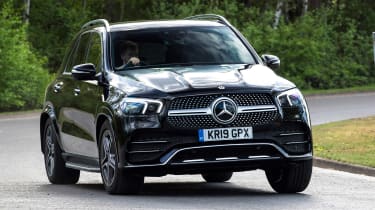 Whichever way you look at it, the Mercedes GLE is a big car – its taller and around 50mm longer than the outgoing model – and it drives as you’d expect a large SUV to drive. But that’s not the end of the story, because the GLE has one or two tricks up its sleeve.

Most impressive is the ride quality, because the GLE is one of the most comfortable and refined cars in its class. That’s especially true if you’ve opted for a six-cylinder model, as these cars are fitted with Airmatic air suspension as standard. That’s not to say the 300 d is especially uncomfortable – the steel springs do a good job of soaking up imperfections – it’s just that the air suspension takes things to another level.

It also means that the GLE remains remarkably flat and poised, whether you’re gliding along a motorway or chucking it into some bends. The steering lacks the feel required to deliver the confidence to really press on, but it’s nicely weighted and well suited to a car of this size.

A nine-speed automatic transmission is fitted as standard, and it does a slick and effortless job of scrolling through the gears. A pair of paddles mounted behind the steering wheel deliver greater control when you’ve ventured off the motorway. The 4MATIC four-wheel drive system is fitted as standard across the range. 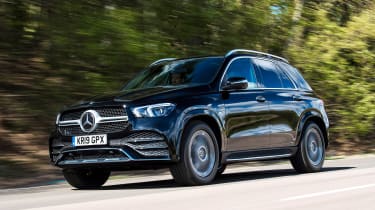 As you’d expect, there’s loads of grip on offer, but the GLE has a tendency to understeer if you try to force the issue. The overriding feeling is that this was a car designed to be a luxurious, refined and comfortable SUV, and in this respect it excels.

The entry-level 242bhp 300 d diesel engine is likely to account for the majority of GLE sales in the UK, but it’s actually the weakest unit. While it delivers the best economy on paper, the four-cylinder sounds gruff under load. However a 0-62mph time of 7.2 seconds isn’t too shabby for a SUV weighing 2,170kg in this guise.

It’s the 3.0-litre six-cylinder mild-hybrid petrol engine that’s the most impressive, offering a level of refinement that feels in tune with the GLE’s general comfort and ambience. It uses Mercedes’ new 48-volt EQ Boost mild-hybrid technology to deliver better economy and improved response at lower revs.