Under fire from environmentalists, SUVs are having a tough time. So what kind of reception will the Mercedes ML63 get? 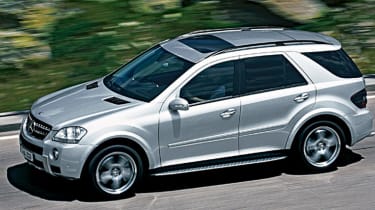 Mercedes' new 6.3-litre V8 is an incredible piece of technology that takes AMG to the next level. The ML63's performance and, more importantly, its handling are seriously impressive for a car this size. But the ML isn't cheap, and fuel returns are dreadful. All the same, the SUV will be a tough challenger for its key rival, Porsche's Cayenne Turbo S.

Despite criticism of SUVs from all corners it hasn't stopped Mercedes from fitting its newest performance engine into the second-generation ML.

Built by AMG, the 6.3-litre unit produces 510bhp and 630Nm of torque. If you've been following Formula One this season you'll have an idea of its true performance, as the same motor has been powering the championship's safety cars.

And there's no mistaking the results of its union with the new ML, either. Even with the engine switched off, the SUV quickly draws a crowd.

Huge 20-inch alloy wheels, flared wheelarches, stainless steel running boards and chrome detailing give the ML63 AMG a low-slung, muscular appearance that distinguishes it from the standard model. Those beefy looks are sure to appeal to some customers, but it's what lies under the bonnet that should really set pulses racing. The 6.3-litre V8 is all-new and, for the first time, it's a completely AMG built-and-designed bespoke engine. Until now, Mercedes' tuning arm has only constructed motors that were based on existing powerplants.

The V8 engine is also used in the new CLK63 AMG. It will appear in the R-Class and CLS by the end of the year and eventually, the unit will be offered in the E and C-Class saloons, too. In the M-Class, it provides a 46 per cent power hike over the outgoing ML55 AMG, while torque is up by 23 per cent.

Even more impressively, this has been achieved without a supercharger. The powerplant is normally aspirated and generates its performance by combining a large capacity with high revs.

From behind the wheel, the sheer rate of acceleration makes it hard to believe you are in a heavy SUV, while the fantastic soundtrack through the twin exhausts confirms you are driving something special. And even more incredibly, handling matches the performance. Helped by AMG struts and a specially tuned version of Mercedes' Adaptive Damping System, the ML63's body control, steering feel and stability are impressive for a car of this size. Comfort or Sport modes are available, and the ride is acceptably firm, while huge brakes ensure the weighty body can be brought to a stop safely.

Buying one proves you have more money than environmental sense - we struggled to return more than 13mpg. However, there's no doubting the build quality or performance. If your conscience and your wallet can take it, there's no finer performance SUV.