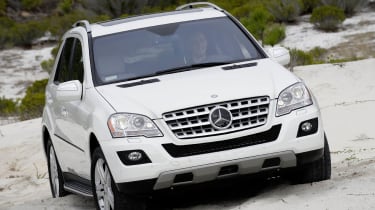 It's difficult not to be impressed by the Bluetec system. It reduces harmful pollutants, and while economy and CO2 emissions are slightly higher than standard diesel versions of the M-Class, the environmental positives far outweigh the negatives. We’re just disappointed that taxation policy will prevent Mercedes bringing it here.

These days, green isn’t the most eco-friendly colour... Blue is! Just ask Mercedes. Over recent years, the prestige brand has refined its range of super-low-emission Bluetec engines.

The latest example has just been developed, and bosses claim it’s the cleanest diesel in the world. So, Auto Express jumped at the chance to put it through its paces in an M-Class.

As well as the BMW X5-rivalling SUV, the powerplant is available in the luxurious R-Class people carrier and enormous GL off-roader.

With revised pistons and a lower compression ratio, plus a fresh turbocharger and ECU, the new 3.0-litre unit produces 208bhp and 540Nm of torque. What’s more important, though, is the Bluetec system, which allows the M-Class to meet stringent US Bin 5 and Euro VI emissions regulations.

The clever technology helps to reduce exhaust gases. It injects a solution called Adblue into the system, which cuts harmful NOx emissions by up to 90 per cent. The mixture is carried on board the car in a 26-litre tank, in place of a spare wheel. It gets topped up at service intervals. Our model, which benefited from the same updates inside and out as the rest of the M-Class range, was very impressive on the move. The massive torque translates into strong performance in a straight line, and makes for effortless overtaking and high-speed cruising.

Unfortunately, fuel economy and CO2 emissions are slightly higher than for the standard CDI oil-burner – and that is part of the reason why there are currently no plans to bring the Bluetec M-Class here.

Although the technology drastically reduces amounts of pollutants like NOx, unless the UK Government takes its focus away from CO2-based taxation, it won’t be seen for a few years yet. And that’s a real shame.