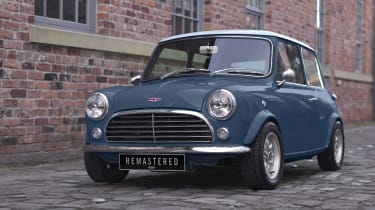 Are you a Mini enthusiast but not impressed by BMW's efforts to relaunch the icon? David Brown Automotive might have the car for you. The 'Mini Remastered' is a 21st century reworking of the classic city car, limited to 100 models and with a projected £50,000 starting price.

That entry-level price reflects the fact that the Mini Remastered is hand-built in the UK, with a bespoke chassis, body and interior taking around 1000 hours to produce. That price will increase to over £70,000 for two higher-spec limited edition models, with customer cars expected to be ready by the end of the year.

David Brown Automotive has been best known recently for building the Speedback GT, a coachbuilt Sixties-inspired model based on the Jaguar XKR. Now the Coventry-based carmaker has gone to the other end of the market with a coachbuilt version of the original Mini.

Described as the "ultimate classic Mini", each car is nearly identical in terms of size to the original but with brand new, hand-crafted body panels. New structural beams add extra rigidity, while the styling has been updated with a new aluminium grille, LED exterior lights and bespoke headlight bezels. Unique badging and puddle lights on the wing mirror further signify that this is no ordinary old Mini. 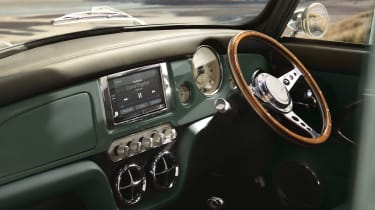 Inside is where things get more revolutionary. The Mini Remastered has been brought right up-to-date with an built-in sat-nav and infotainment system featuring Apple CarPlay and Android Auto. There's also keyless push-button start, bespoke seats with hand-trimmed upholstery and a dash with high-end leather covering and milled aluminium switches.  Retro Smiths dials also feature, while David Brown has even enhanced the driving position to make it more comfortable.

The Mini Remastered is powered by a reconditioned version of the 1,275cc engine with a claimed 50 per cent power increase over the original unit. There's also a reworked four-speed gearbox, upgraded suspension, four-piston disc brakes all-round and increased soundproofing. Company founder David Brown claims the car will have "all the style and feel of a classic but with modern dynamics". 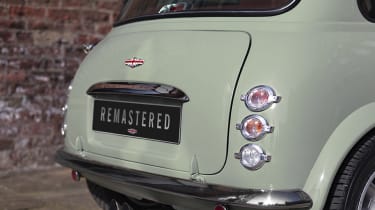 The new car comes after the company moves its headquarters from Coventry to Silverstone, UK, with a new 18,000 sq.ft design and sales studio due to open there in the summer.

What do you think of the David Brown Mini? Let us know in the comments...