Britain’s eighth best-selling car, the MINI, has been given a significant mid-life update to keep it fresh for 2018.

Among the updates are standard-fit LED lights, improved tech options and a new dual-clutch auto gearbox. Production of the revised three-door, five-door and Convertible starts at the firm’s Oxford plant in March, with customer cars arriving soon after.

The biggest visual change is new LED tail-lamps with the Union flag imprinted across the lens. These will be fitted as standard on every UK model. They join a set of fresh LED headlights, featuring new single-ring daytime running lights and a one-piece indicator design. A new adaptive Matrix beam LED headlight system – the first of its type in the class – is available as an option. 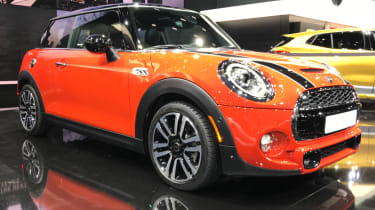 Elsewhere, the styling upgrades are evolutionary, with the brand’s revised logo design used front and rear. There are three extra exterior colours to choose from, as well as new alloy wheel designs and optional 3D-printed trim pieces.

Every model now offers a 6.5-inch colour touchscreen lifted from the MINI Countryman, plus Bluetooth. Drivers will still get the familiar BMW iDrive-like controller on the centre console, along with a new multifunction steering wheel. 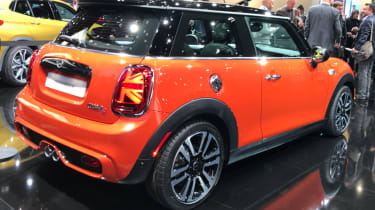 New leather upholstery options have also been made available, while the Chili and Pepper option packs have been upgraded with additional kit. The suspension, chassis and steering are unchanged, but the MINI One inherits a detuned version of the Cooper version’s 1.5-litre turbo petrol engine. Power is still 134bhp, and while torque has been increased by 10Nm, we’re told performance is unaffected.

Other engines have subtle revisions to improve driveability, but the Cooper’s claimed economy figure drops from 62.8mpg to 56.5mpg. All engines also feature a new, lightweight carbon fibre-reinforced plastic cover.

The One, One D and Cooper D get the option of a new, more efficient seven-speed dual-clutch gearbox, while the Cooper SD and JCW cars use a new eight-speed torque converter auto. A six-speed manual remains the standard choice across other powertrains. 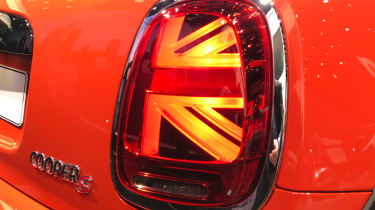 An intelligent stop/start system features on the new MINI hatch and Convertible, too, using the car’s camera and navigation set-ups to switch the engine on or off as necessary. Cars fitted with MINI’s drive mode selector now feature a coasting function to save fuel.

Prices and specs will be revealed closer to the Audi A1 rival’s delivery date, but given the equipment and tech upgrades we expect the start price to rise slightly over the outgoing £14,640 MINI One. As before, the five-door is likely to cost £610 more than the three-door, with the Convertible starting in Cooper guise from just under £20,000.

What do you think of the facelifted MINI? Let us know below…