New MINIs will no longer be classified based on engine, with three dedicated trim levels announced 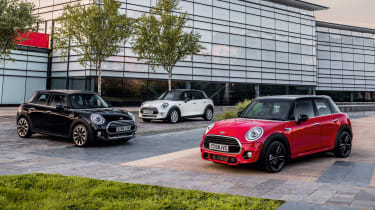 MINI has announced a line-up reshuffle for the UK effective from November. The change is made up of a five-step ordering process centred around three new basic trim styles, and will be available across most of the brand’s range.

Buyers pick a model, be it the 3-door hatchback, 5-door hatchback, the MINI Convertible, the Clubman estate or the Countryman SUV, and then select which engine they’d like.

This mean engines have now become engine choices in their own right, and no longer define the model line-up. Options still consist of the One badged 1.5-litre three-cylinder 101bhp petrol, the two Cooper units – the same three-cylinder 1.5-litre petrol unit but with 134bhp and the 2.0-litre turbodiesel Cooper D with 148bhp – plus the range topping 189bhp 2.0-litre four-cylinder Cooper S engine. 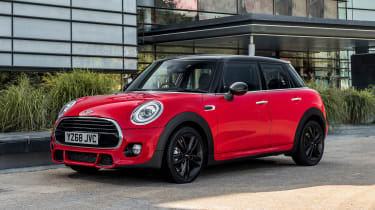 Specification across all models has been updated to include automatic headlights, MINI logo projectors under the doors, and selectable interior ambient lighting as part of the MINI Excitement Pack as standard.

The three new exterior and interior ‘Styles’ are essentially MINI’s new trim lines. The Classic style is available with every engine, and cuts a restrained look using standard bodywork. It’s the basic trim level priced from £16,190 on the three-door hatch with the One engine, which represents a slight price increase of £285 over the outgoing MINI One 3-Door hatch due to the extra base kit included.

On the hatchback models, Classic cars use the MINI Hatch’s regular bodykit, but with 15-inch steel wheels on cars equipped with the base One engine. Larger alloy wheels come as standard on Cooper and Cooper S cars, priced from £20,660 as a Cooper S Classic.

The Sport style consists of a John Cooper Works (JCW) bodykit and either 17-inch or 18-inch alloy wheels, plus a handful of JCW tweaks inside like a sports steering wheel and sports seats. Cruise control and sports suspension are both no cost options.

Exclusive is the range-topping style and combines some of what you’d get with the Sport model with a little more in the way of luxury. The bodykit is updated with chrome accents and chrome trim elements are found in the cabin, alongside leather sports seats and a leather steering wheel.

There is no difference in price between Sport and Exclusive – both begin from £20,230 for a 3-door Hatch with the 134bhp Cooper engine and aren’t available with the 101bhp three-cylinder One engine option. 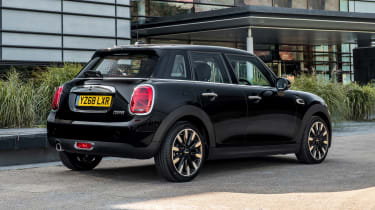 The number of optional extra packs on the MINI’s extras list shrinks. The Chilli Pack and the John Cooper Works Sport Pack both disappear as they’re essentially covered off by the new system. Instead, options are now limited to tech and driver assistance packages, with all cosmetic extras instead offered through the three new styles.

Buyers can still select paint colours and wheel designs, however, with a selection to choose freely from depending on which Style is opted for.

The MINI Countryman Plug-In Hybrid remains on sale, but as a separate offering not part of the new style pack based ordering system.

Find out what happened when we tested the MINI Cooper against the SEAT Ibiza right here...