The MINI's new diesel engine is a big improvement over its predecessor and it's more refined and responsive, too 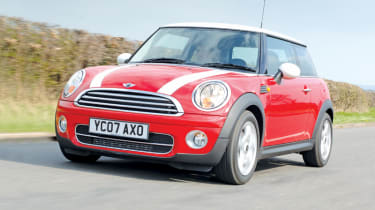 The Mini's new diesel engine is a big improvement over the lethargic 1.4-litre unit used in the first-generation car. It is more refined and it feels responsive enough, especially around town. Fuel economy is strong, too. However, we're not convinced that this variant is suitably punchy to merit the Cooper badge, and it lacks the sense of fun of its petrol-powered counterpart.

When you are dealing with a million-selling car with a history going back 50 years, it's hard to come up with something that's truly groundbreaking.

Yet that's exactly what MINI is set to do this week, with the launch of the very first Cooper to be powered by a diesel engine. It's a big moment for the Oxford-based car maker, and a landmark in the evolution of the much loved machine. The move also represents a thumbed nose to the critics who have labelled the all-new second-generation version as something of a disappointment.

True, a keen eye is needed to spot the differences between old and new, although there are real changes under the skin, including the engine line-up. We've already tried - and been impressed by - the all-new 1.6-litre petrol which is now available in the One, Cooper and Cooper S. Now, it's the turn of the diesel to shine.

Perhaps the best news is that, from the outside, there's little to distinguish the oil-burning Cooper from its petrol counterpart. Beyond the addition of a 'D' badge, the car remains the same - the chrome grille and exhaust are standard, and specifying a white roof and mirrors won't cost extra. However, the bonnet stripes are a £60 option.

There's no change inside, either, where the now-trademark MINI styling continues. The round dials, large central speedo and retro switches give it a real sense of fun. It's roomy in the front, thanks to the upright windscreen and narrow A-pillars, but back seat passengers get a raw deal - there is precious little legroom. Even children will struggle climbing in and out.

The real difference is the engine. As with the petrol unit, the all-new 1.6-litre diesel was developed in association with PSA and is already found in Peugeot's 207. Emitting only 118g/km of CO2, this MINI is the BMW Group's cleanest car ever, while its 260Nm of torque matches the hot Cooper S.

Featuring variable turbine technology, the Cooper D's engine is smooth and suffers from no turbo lag, pulling strongly from as low as 1,250rpm. It's also incredibly quiet, even at high revs. However, it provides little excitement.

A 0-60mph time of 9.9 seconds isn't slow, but the power delivery is gradual rather than forceful and it takes a while to build up speed. On the motorway, the engine is quiet and the Cooper D has no problems keeping pace. Yet on a twisting back road, the lack of urgency is frustrating - the powerplant's relaxed character is at odds with the MINI's sporty nature.

This is no surprise considering the unit produces only 108bhp (the petrol Cooper has 120bhp), and the driving experience certainly suffers as a result. Thankfully, there is no difference in terms of the handling, with the keen MINI dynamics all present.

A sharp, well balanced chassis and wonderfully weighted steering with lots of feedback mean the Cooper D is good fun to drive, while minimal body roll and plenty of grip add to the experience. The ride successfully balances sporty firmness and comfort, so long journeys are relaxing.

However, this isn't quite enough to make the Cooper D a genuine hot diesel supermini, as it lacks the punch and responsiveness of rivals such as Skoda's Fabia vRS. The new powerplant is better than the Toyota oil-burner it replaces, and works well with the slick six-speed shift, but performance fans will be disappointed.

If you're seeking a competent and enjoyable diesel hatch, though, the Cooper D is a good choice. Just be ready for miserly standard kit levels. Even air-con, which we expect on a car of this price, is a £660 extra and the rest of the options are expensive.