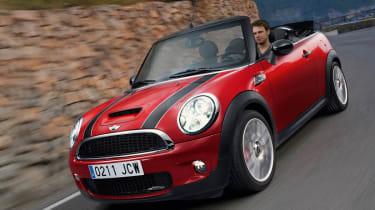 There’s little that the John Cooper Works Convertible doesn’t have going for it. The small, turbocharged engine is just as fast and responsive as rivals with twice the power and the handling is second-to-none. Strong residuals, great looks and impressive economy and emissions make it one of the best all-round performance cars on sale today. It’s only pitfall is the Cooper S, which has similar abilities but for less money.

We raved about the JCW hatch when we got behind the wheel in July – and the convertible is just as much fun. Go-kart-like handling and a rorty banging and popping soundtrack are the order of the day. A 0-62mph time of just 6.9 seconds puts the JCW firmly into Focus ST territory, too.

But it’s more than just a chopped roof, as MINI’s boffins have tweaked and honed the current shape drop-top so that it offers serious improvements over the previous model. The new convertible is ten per cent stiffer than its predecessor, which minimalises scuttle shake and improves safety and handling.

All MINI convertibles also boast a wider track, five extra litres of boot space and around an extra 10mpg on their predecessors – largely thanks to BMW’s eco-friendly Efficient Dynamics systems.

Improvements aside, performance is the JCW Convertible’s trump card. Gun the throttle and the MINI leaps forward enthusiastically with huge reserves of grunt from the relatively small 1.6-litre turbocharged engine. Peak torque is 260Nm, but there’s also an extra 20Nm on tap from the overboost feature, for short bursts.

It may be front-wheel-drive, but the JCW handles with the kind of crisp precision that we’d expect from a rear-wheel-drive sports car. Grip is very strong – there’s a hint of understeer, but it’s extremely easy to punt the car into corners with huge confidence.

Our only criticism of the JCW is its firm ride, which is to be expected on such a raucous car. But the only real downfall is the JCW’s little sister – the MINI Cooper S convertible. The S isn’t quite as hardcore, but with 175bhp, 44.1mpg, stop-start technology and a price tag of £18,995 – a massive £4,475 less than the JCW – it’s a great compromise between price and power and makes more sense.

But if your budget permits, then few cars can deliver the same top-down fun as the JCW.