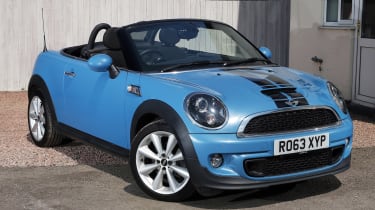 The Roadster is every inch a MINI in that it has the unmistakable cute looks, slightly over-designed interior, excellent build quality and classic fun driving experience. However, while most MINI owners enjoy good levels of refinement, you don’t get these with the Roadster. If you do a lot of motorway journeys you might find it all gets rather tiring. Compared with any of the other MINI derivatives (some John Cooper Works editions excepted), the Roadster feels quite hardcore in terms of comfort and noise levels. You should try before buying, but there’s a good chance you’ll be hooked.

BMW has never been afraid to think big when it comes to the MINI, which is why when it introduced the Mk2 hatch in 2007 it was just the start of an ever-expanding range that would also include the two-seat Roadster and Coupe.

The Roadster was intended to be more sporting than the regular MINI Convertible, featuring a stiffer bodyshell and the brand’s more powerful engines, with the entry-level model being the Cooper. By offering strictly two seats only, boot space was improved – and hence so was usability. The car was only ever going to be a niche product, but if you don’t need four seats it could be just the job if you’re looking for stylish, open-top thrills this summer. 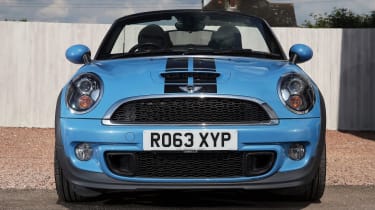 The Roadster’s timeline is straightforward, as once the model had been launched in the UK in spring 2012, there was no development of it until its demise in 2015. From the outset there was a four-strong line-up with the cheapest model (priced at £18,015) being the 122bhp Cooper. Above this was the 184bhp Cooper S, while at the top of the range was the £24,850 211bhp John Cooper Works.

All of these were powered by a 1,598cc petrol engine, but diesel fans could buy a Cooper SD Roadster, with a 143bhp 2.0-litre engine. Each derivative featured a six-speed manual gearbox with a six-speed auto optional; the latter has a big impact on fuel economy, and thus CO2 emissions.

Whether to buy petrol or diesel is your first decision; don’t dismiss the Cooper SD too lightly, though; it has a terrific engine and you might get a better deal with diesel starting to fall out of favour. Both the manual and automatic transmissions are excellent, although the latter is quite rare.

If you want a petrol edition the John Cooper Works is the most costly, and as it’s especially driver-focused you might find it hard work on an everyday basis. The Cooper might feel rather anaemic, which is why the much more zesty Cooper S offers the best balance of usability, costs and performance. Most MINIs come with an option pack or two, so pin down the exact spec of any potential purchase.

Alternatives to the MINI Roadster

The MINI Roadster was pitched squarely against the Mazda MX-5 – a fearsome rival, as it’s so talented and affordable in terms of purchase and running costs, as well as reliability. The MX-5 is desirable because it’s so usable, plentiful and brilliant to drive. 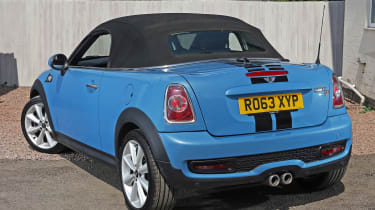 Another pair of key rivals that are more costly and arguably more sporting thanks to being rear-wheel drive (the MINI is front-wheel drive) are the BMW Z4 and Mercedes SLK. Pitched at a higher level than the MINI, these cars will cost you more to buy, as will the Audi TT Roadster – another very capable and desirable drop-top with its powerful petrol and diesel engines, classy cabin and top-notch build quality.

If you’re looking at a MINI with an upgraded sound system, check that the speakers are working properly; sometimes they don’t.

The run-flat tyres combined with the stiffer suspension of the Roadster may well mean that some owners will find the ride a bit too harsh.

Where the Convertible has a multi-layer roof, the Roadster gets a single-layer item, so refinement  isn’t quite as good.

The Roadster is strictly a two-seater; there isn’t any space in the back for luggage. But that’s because boot space is expanded. 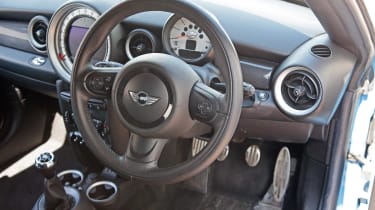 The Roadster’s cabin will be familiar to any MINI owner, with supportive seats, good build quality and a bit of an over-designed feel. The 240-litre boot might not sound very promising, but it’s bigger than the 125 litres of the Convertible, and a ski hatch allows you to carry longer loads.

All MINI Roadsters have variable servicing, allowing up to two years or 16,000-20,000 miles between check-ups. The service schedule alternates between minor and major at £230 and £390 respectively, or £185 and £285 once a Roadster reaches its fourth birthday.

Fresh brake fluid is required every two years (at £50), while the air-con is checked every service; recharging it costs around £80. There’s no cambelt to replace, which cuts bills. Most MINIs are sold with a TLC all-inclusive servicing package which lasts three years or 36,000 miles (previously five years or 50,000 miles); this can be topped up by three years or 30,000 miles for £299. 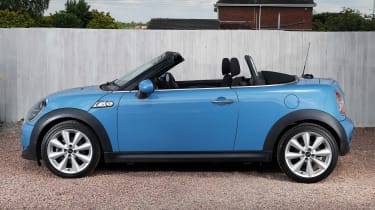 MINI has a good record when it comes to recalls. Since the Mk2 car was introduced in 2007, the BMW sub-brand has called its cars back just once.

That came in August 2013, affecting 19,168 examples of the Countryman and Paceman fitted with the N47T 2.0-litre diesel engine. Moisture could get into the wiring connector for the electric power-steering. MINIs built between August 2010 and March 2013 were caught up in the campaign, but the Roadster wasn’t affected.