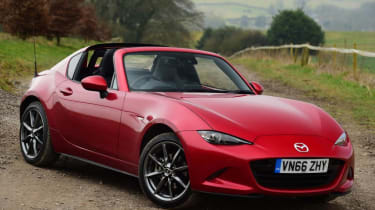 It seems such a simple formula, yet in the 30 years since the MX-5 arrived, nobody else has managed to emulate this brilliant – and brilliantly affordable – roadster. We love it so much that every year since it launched, it’s picked up the Best Roadster gong at our annual New Car Awards. The Mk4 version is light, powerful, economical and better equipped than its predecessors. It’s also more luxurious and safer, which is why it’s the best MX-5 yet – and by some margin.

When Mazda launched the MX-5 30 years ago it wasn’t expected to become an icon, or to survive so long. But it has done both those things, with four generations launched so far, all fulfilling the original aim of providing affordable driving pleasure.

With summer about to arrive, what better way is there to enjoy the warmer, longer days than by investing in a wallet-friendly two-seater convertible that’s spot-on dynamically, and won’t cost you the earth to run?

Stylish, reliable and incredibly engaging to drive, the Mazda MX-5 is the default car for thousands of people wanting something more fun and more interesting than a regular hatchback. Try one, and you’ll soon see why the model has become such a hit.

Within six months the first limited edition had been launched. The 2.0 Sport Recaro has a bodykit, metallic paint and diamond-cut alloys. Since then there have also been other special editions: the Icon (600 made, launched June 2016), Arctic (400, February 2017) and the Z-Sport (300, March 2018).

The MX-5 RF arrived with its folding metal roof in March 2017, in both 1.5 and 2.0-litre forms; the 2.0 Launch Edition special was limited to just 500 units. A facelifted MX-5 reached showrooms in September 2018. The 2.0-litre engine was now rated at 181bhp, while extra safety equipment was fitted from mid-range cars upwards.

The MX-5 has never been about outright performance; it’s about the feel of all the controls. As a result, the 1.5-litre car is all you need, although the 2.0-litre engine provides more urge. The RF is popular but demand for autos is limited, which is no surprise given that the manual transmission is so slick.

Alternatives to the Mazda MX-5 Mk4

Surprisingly, the MX-5 has few rivals, and the only true alternative in terms of price and configuration is the Fiat 124 Spider, also available as an Abarth. These cars share the MX-5’s suspension and platform, but feature Fiat’s 1.4-litre turbo engine; ultimately, though, the Mazda is more thrilling to drive than the Italian duo.

Other two-seater convertibles are all more costly, so you’ll have to settle for an older, higher-mileage example if you want to pay MX-5 prices. For around £15,000 you could secure a low-mileage 2.0 TFSI Audi TT from 2013, or a 50,000-mile Porsche Boxster 3.4 on an 08-plate. Or how about the Toyota GT86/Subaru BRZ? They’re not drop-tops, but they’re still tremendous fun, as well as cheap to buy and run.

When the soft top is stowed, it can rub on the roll hoops, leading to holes forming in the fabric. Carefully inspect roofs for damage.

There’s talk on owners’ forums of weak gearboxes, but only track-driven cars seem to be affected. Quiz the previous owner about this.

A six-speed manual transmission is standard on all MX-5s, with a six-speed auto optional on the RF 2.0. Go for the manual if you can.

MX-5s fitted with the 2.0-litre engine have a limited-slip differential to help get the power down; 1.5-litre models forego this.

The dash shares much with the Mazda 3’s, so it’s user-friendly and has a high-quality finish. Tall drivers may find the cabin cramped and, until the 2018 facelift, the steering wheel adjusted for rake only; later cars got reach adjustment, too. The infotainment is very user-friendly, but the boot can only stow 130 litres. Still, it’s quite deep, so you can carry a couple of decently sized bags.

Brake fluid is needed every two years and is included in these bills. Coolant has to be replaced every 10 years or 125,000 miles; when this is done, the service is £314.

The MX-5’s engines are chain-driven, so there are no cambelts to renew. Its transmission fluid must be replaced every five years, and this cost is built into the £240 service price. Three or five-year service plans are available that guarantee the cost of maintenance.

The MX-5 Mk4 has been recalled twice so far. The first time – in September 2018 – relates to a programming error, which could lead to overheating electrics, causing the engine to stall and not restart, or even a fire. An action in February 2019 addressed a problem where auto MX-5s could downshift for no reason. Reprogramming the relevant module or ECU fixes both the issues.

The fact that the MX-5 came 22nd in the Driver Power 2019 new car satisfaction survey is very impressive when you consider its specialist nature. Proving that the Mazda is no one-trick pony, it achieved top-10 placings for its engine and gearbox, exterior, running costs and reliability – plus a silver medal for ride and handling. Unsurprisingly, it came last for practicality.